The project, funded by the German Federal Ministry for Economic Cooperation and Development (BMZ) and Child Fund Germany, was meant to help people living around the end to get access to clean drinking water.

In her speech on the occasion, Anita Martin, representative of the German Embassy in The Gambia, said the project is aimed at improving access to clean drinking water for a total of 30,000 inhabitants in 12 communities of the West Coast Region of The Gambia.

According to her, access to clean water is not only a basic need of mankind but a necessity to sustain all forms of life in the world.

She added that water scarcity and lack of access to water by the poor are among the main obstacles to full enjoyment of the right to water.

The German diplomat stated that in villages without improved water sources, residents are required to travel long distances and this leaves women and girls vulnerable and bring risks of waterborne diseases, among other hardships, to them.

Anita said she is confident that up to 2013 the availability of clean drinking water from closed wells will be improved and sustainably secured, the village structures will be strengthened and the hygiene standards will be increased in the region.

“This assistance is a reflection of Germany’s goodwill and friendship to the Government and people of The Gambia, while helping development of such projects and this assistance will contribute to strengthening the friendly ties between the two countries,” she said.

He stated that the need in the selected communities is serious and the pressure on their existing sources was extremely high.

“The choice had been carefully done in close cooperation with the water department and the PDOs of our partners as well as the former project manager and the people of the community,” he noted.

Mr Kupper also said the sustainability of best quality water from the well in the future will depend on regular payment to the water maintenance fine for everyone who takes advantage of the new well directly or indirectly.

“The project is not only focusing on the water source development but to the same extent, let communities learn more about water hygiene within the community environment,” he said.

In his remarks on the occasion, Eustace Cassell, National Director of ChildFund The Gambia, said that after the EU water project they did find it necessary to help lots of people with water.

The project will run for two years and will not only stop at digging the well but also help communities to manage it well and to create awareness on hygiene and water sanitation,” Mr Cassell said, adding that their interventions would ensure the sustainability of the project. 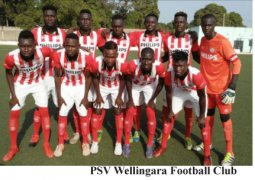