Capital Gas, which is presently sued by its former employees, Kemeseng Sanneh and his colleagues, at the Kanifing Industrial Tribunal, is also facing another claim at the tribunal filed by Alhagie Manneh, Pascal Barry, Malang Manneh and Ansumana Bojang.

Magistrate Jobarteh presided over the case.

The plaintiffs are claiming for the recovery of D5,511, 286.54 being salary deduction, accumulated leave arrears, overtime, public holidays, damages and compensation, and six days of work, 30 percent interest and cost.

The particulars of claim stated that the plaintiffs were at all material time working for the company.

They also claimed for their terms and conditions of employment contracts, annual leaves, overtime, public holidays, salary reduction and protective gears but to no avail.

They indicated in their claim that the matter was reported to the Labour Department to seek redress.

The plaintiffs further claimed that the Labour Department convened two meetings at which the defendant promised to apply the terms and conditions of employment in a week’s time with effect from the date of the meeting but failed to do so.

They claimed the union wrote a fourteen-day notice to institute an industrial action.

The Labour Department again claimed the plaintiffs intervened and convened a meeting.

They claimed the defendant again promised to institute the terms and conditions of employment but failed again to do so.

According to their claim, they were given employment contracts which indicated 10 hours of work per day and wrong date of employment and positions.

The plaintiffs further claimed that they wrote to the defendant accepting the contract of employment on condition that their date of employment, positions and hours of work were rectified in accordance with the Labour Laws as 8 hours of work per day, and excess hours work be paid as overtime but the defendant refused to change the hours in accordance with the Labour Laws, as the defendant party have their own law which, according to them, no one can make them change.

The plaintiffs cried foul in their claim, because, according to them, the defendant did not state any valid reason for terminating their services.

They were represented by Garba Cham at the tribunal. 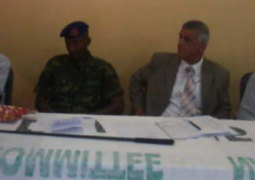