The President of Brikama Youth and Sports Committee, ASP Lamin King Coolly has spoken of his committee's willingness in developing Brikama Mini Stadium.

ASP King Colley made this remark during an interview with Pointsport yesterday at his office in Brikama.

According to him, his committee has already built a dressing room, equipped with toilet facilities. He said they have also embarked on building comfortable seats for sports journalists at the Mini Stadium.

He further revealed that plans were in the offing to build more pavilions at the Mini Stadium in the near future.

Commenting on The Gambia's defeat in the hands of Nigeria U-17 team in a friendly match on Monday, ASP King Colley said he was impressed with the performance, despite the fact that they lost the game.

He expressed hope that The Gambia U-17 team will perform extremely well in the 2009 FIFA U17 World Cup in October, in Nigeria.

He thanked the players for their hard work and commitment during the two friendly games, urging them to keep up the momentum.

He finally hailed GFA for their contribution towards the development of football in the country. 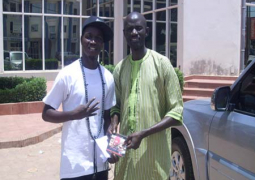