The gesture, an annual largesse, is geared towards helping needy Muslims to meet the most important rite of the annual Muslim feast.

Speaking at the handing over ceremony, held at Abuko and Churchill's Town, Mr. Darboe, said that the donation is his modest contribution towards helping the poor and the needy to have a memorable feast, adding that he believes in sharing his God-given wealth with the less privileged.

According to Mr. Darboe, the gesture is also in accordance with the Islamic teachings for Muslims to share and care for each other, particularly in times of need.

He disclosed that the rams will be distributed in other regions of the country, targeting Imams and the needy people.
Mr. Darboe intimated that the cost of a ram is very exorbitant and almost unaffordable to an average worker, let alone those who are unemployed.

"Every Muslim has the right to be happy during the Eid El Adha, and it is the responsibility of the affluent to come to the aid of less fortunate in such occasions," he said

Mr. Darboe implored all well-to-do Gambians to emulate the example of President Yahya Jammeh, whom he said, is very generous to the poor at all times.

"We can make our country a little paradise if we mean well for our neighbours," he remarked.

Modou Turo Darboe heaped encomiums on the Gambian leader for what he described as his determination in taking The Gambia to the higher heights.

He stated that this is not the first time he is extending a hand of support to the less fortunate in society, adding that for the past 15 years he has been giving rams to Muslims for the Tobaski feast.

"As Muslims, we are obliged to help one another," he stated.
Speaking on behalf of the beneficiaries and the entire Muslim Umma, one of the beneficiaries described Mr. Darboe as a generous Muslim who is always helpful to the needy people, either in cash or kind.
"All we need to do is to pray for his good health and long life," said a beneficiary.
The beneficiaries, including Imams hailed Mr. Darboe for the benevolence, describing him as a wonderful person who contributes immensely to poverty alleviation. 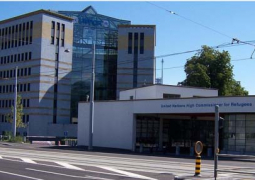