Buba Bojang, Omar Danso put out Manifesto for Alliance for Advancement and Standardization of Gambian Football 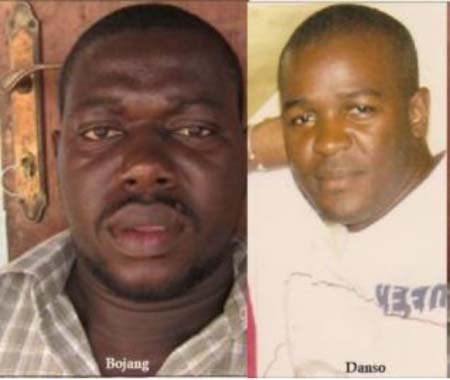 Presidential aspirants Buba Bojang and Omar Danso on Friday launched a joint manifesto at the Serrekunda East Mini Stadium, as GFF presidential election takes place on 20 September 2014. Here, following, is a rundown of the manifesto.

It is our belief and understanding that this election is a test for building new confidence in a new executive of Gambia Football Federation (GFF) Bureau with the mandate to continue running the affairs of GFF Gambia following the unfortunate events that led to the suspension of The Gambia by CAF from all its competitions and the appointment of a Normalization Committee to organize election for the new Executive Bureau.

What had happened was unfortunate and we have heard well on that. We wish to take from where the ousted executive stopped with renewed effort and great deal of commitment, honesty and sincerity to ensure the lifting of the universal suspension as a fundamental starting point for realization of our desire to make The Gambia a Football Nation.

The Alliance shall be committed to implementing a totally professional approach to managing the football as laid down in Strategic Plan of The Gambia Football Federation presented at the recently held National Football Conference that shall have a close parallel to the government sports policy and football strategic plan.

Despite the geographical vastness, the Alliance shall be overwhelmingly committed to ensuring that the same opportunities are available to all members and regions.

Above all, the Alliance in recognition of the effort of the President of the Republic as the Chief Patron of GFF, shall also be committed to supporting the vision and purpose of the president of the republic and the government of The Gambia through the Ministry of Youth and Sports (MOYS).

During the tenure, the plan will provide the essential framework for ensuring the growth and continual enjoyment of the game. Whilst it is a 4 year plan, it will continue to be monitored quarterly and reviewed annually to ensure it continues to meet not only the needs of our Federation but to address the new phenomenon “most go Europe”.

Recently the quest for greener pastures has made thousands of young Gambians many of whom are skilled footballers who do not possess the necessary travel documents -visa- to embark on a precarious journey to Europe with the hope of entering Spain or Italy. Only few survived this trip while a fraction succeeds, even though at the risk of deportation whilst at detention camps.

The Alliance strongly believe that football can address any difficult situation; it is our wish to use football to create awareness, self reliance, inspired hopes, reassured the next generation of youthful Gambians, that there is better ways one can instead choose. Alliance believes that the dignity of human life should not be compromised for any struggle. We are a small but great nation, hardworking citizens with numerous ambitions to succeed; it is high time we do not leave anything to chance.

It is in this spirit that the Alliance commits candidature for the 20th September 2014 Gambia Football Federation presidency.

To create an enabling environment and opportunities for the advancement and standardization of Gambian football in the quest for achieving excellence.

Endeavour to make the Gambia a healthy and vibrant football nation.

The fundamental starting point is to ensure that the CAF universal suspension is urgently lifted;

Rebuild the confidence in GFF with all the relevant stakeholders within and outside the country;

Promote and improve the game of football across the seven regions in the light of its unifying, educational, cultural and humanitarian values, particularly through youth and development programs;

Enhance and promote the community participation and contribution in league football;

Ensure market avenues and opportunities are created for our young and talented players;

Promote and protect the clubs and players general welfare;

Promote and develop the grassroots and youth football through schools and academy football competitions;

Mobilize funding and sponsorship for all competitions.

The comprehensive GFF Strategic plan harmonized with the relevant government football policies or strategic plan will be implemented upon the approval of the General Assembly.

Relationship with the Stakeholders

The Alliance will be committed to creating and establishing excellent working relationship with all the stakeholders in football such as players, members, the Media, NSC, MoYS, WAFU, CAF and FIFA and all other partners for the promotion and development of the game.

1. The Alliance will very much commit to closely work with the government, CAF and FIFA for the provision of infrastructures needed for the football development;

2. To facilitate the provision of Mini-Stadia in all the regions with functional management structures;

4.  Work closely with the government and local government authorities to ensure that the regional associations and clubs acquire land space for football fields and stadia.

The financial institution of GFF will be well structured to ensure proper financial management and control.

1.  The Alliance will ensure that the marketing and communication department is reinforced and standardized to attract sponsors and partners for the promotion of our competitions and the game;

2.  In recognition of the vital role played by the media in the football development, will work towards enhancing the capacities of sports journalists for effective coverage and cordial working relationship.

The Alliance looks forward to national leagues being played in the regions with the advent of standard mini-stadia in the regions.

It is the desire of the alliance to raise the league to semi-professional league in our quest to attract scouts for the marketing of young talented players.

Club / League Football is the life blood of National Team Excellence meaning game development which describes the need for football development plan to provide leadership and support to this critical part of the game. Therefore we will review the existing club structures and to better support Club Development and Introduce CAF Coach/Club License program.

The Alliance, in collaboration with Gambia secondary school football Association, MoBSE and MoYS, will see to it that annual football competitions are organised among Lower Basic Schools, Upper Basic Schools, Senior Secondary Schools and Tertiary Institutions. The national preliminary rounds will be conducted across the country to be followed by the championship proper which will involve the respective qualifiers.

Nawettan football being the most popular football in The Gambia, will be given full support and assistance in terms of building the capacities of the various local organizers, whose knowledge in the game are very low, and to ensure that trained referees officiate all recognized centres. The popular super nawettan will be expanded to include all the major nawettan centres in the country.

The extraordinary growth in women’s participation in the recent years has changed the face of football in the Gambia. In our view the best years for Gambian football are ahead of us, and we have no doubt that women’s football will be at the forefront of our progress. The strategic plan is set to chart our path forward, so that girls and women can access and thrive in the game as easily as their male peers. And, importantly, this strategy recognizes that it is football’s feminine half who will bring the broad participation and all-round support that is critical to football’s economy and will enable our game to truly prosper.

By building a solid development pyramid, we can offer player development philosophy second-to-none - leading to international alongside lifelong recreational opportunities for women as fans or grassroots participants in the game the country loves most.

Is to make football the most played sport amongst Gambian women and girls, while supporting the elite women players in senior teams to participate in domestic leagues and on the international stage

Providing the opportunity for girls to play football through schools, outreach programs and competitive tournaments, not only do such events raise interest and participation, they also underline important social values such as equal opportunities, teamwork and respect.

The Alliance has put great concern and commitment to the welfare of Gambia players. By this all players will be formerly and properly contracted and ensure that protection and security of players at both national and international level are safeguarded. The players’ association enshrined in the constitution would play very important role in the promotion of the welfare of players thus the alliance will facilitate the formation of the association.

As part of the empowerment of the league clubs, we work towards the formation of league clubs Association affiliated to GFF. This association will see to it that the league clubs are protected and their concerns are address. This will also serve to collectively discuss issues as one body instead of camp basis.

The alliance will work very closely with the coaches association to provide adequate and regular training for coaches from grassroots to professional level. As the role of the coaches is very paramount in the development of the game, the national training centre will be fully utilized to provide training for local coaches.

We need high quality coaches who can create a learning environment and meet participants’ needs where transfer of the game knowledge to players is considerably possible. To do that we need:

Establishment of a Competition Department

The Alliance is ever committed to the participation of all the national teams in all major competitions. It is our utmost desire to see that Gambia is in Africa Cup of Nations and as well World Cup in the soonest possible time.

The referees being one of the most important sectors in football, we will promote and support Referees Education (Initiate Promising Referees Program).

Football is a global sport and its rules must be interpreted and applied with absolute consistency wherever the game is played. As the GFF President I will encourage the ongoing training for our referees to ensure that refereeing standards continue to improve and the laws of the game are applied the same way everywhere.

We will set standards and appraise procedures such as:

Players’ medical assessment test before the commencement of the league;

Introduce a Players Passport from the age of 13 years.