Javier Blanco, the sponsor of Brufut-based academy, Brufut FC Canarias, is set to improve the structures of the academy to meet international standards.

Mr. Blanco who is in  Banjul as part of a visit from Spain and to witness the recruitment of new players for the academy last Friday spoke to Pointsporton the future of the academy and Gambian football in general.

He said the academy was established in December 2007, in partnership with a Gambian friend he met in , Lamin Manneh.  The idea behind taking charge of the academy is to make the children happy and teach them team spirit.

According to him, the children at the academy are progressing very slowly due to the lack of a training field of their own.

"The Alkalo of Brufut has promised to give us land so that the children can hold their regular practice. This will also give us the opportunity to build the necessary structures on the land," he explained.

The Brufut Canarias FC, who were crowned champions of the GFA U-15 Inter Academy Tournament sponsor said when these structures are put in place, "there will be more room for talented players from the academy for the purpose of national teams and leagues in ."

Commenting on Gambian football in general, he said The Gambia is blessed with very talented players but noted that the problem is that its players go in for minor leagues.

football will rise if the players have succeeded in attracting bigger teams in well- established professional leagues like players from countries, such as and . And are allowed to leave the country at an early age to teams or academies in ," he pointed out.

Blanco who is also engaged with academies in added that, "clubs should be open and realised that the future of the players is their interest before the players get old."

The Brufut Canarias FC sponsor who has been a frequent visitor to The Gambia for the past 25 years working with tourists from has not only stopped at sponsoring the academy but had also ventured into health and education sector of The Gambia.

He is also the founder of the eight-classroom (and Primary School soon with 8 more classes) which has a functional clinic for the community of Lamin.

According to him, he did it out of love for The Gambia as 120 of the 350 students attending the school are sponsored by him, while others pay at a low cost, all geared towards promoting education in the country.

Blanco?s love for The Gambia also prompted him to help established an association of Gambians in who commemorated The Gambia's national day for the first time this year.

Efforts to standardise the academy is in high gear as the academy has now employed the services of a General Manager. 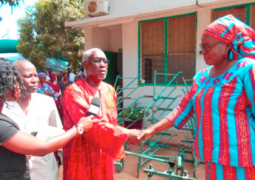