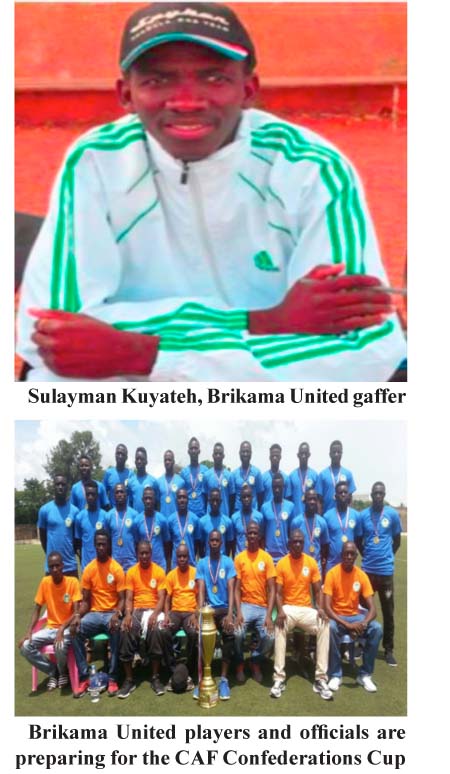 Sulayman Kuyateh, head coach of Brikama United, has said his side would need D4.5M for their participation in the 2017 CAF Confederations Cup campaign.

Coach Kuyateh made this remark in an interview with reporters in Brikama recently.

Coach Kuyateh said the team needs D4.5M for the continent’s second tier football competition, adding that Brikama United will be the first Gambian club to reach the group phase of the CAF Confederations Cup.

Coach Kuyateh appealed to the people of West Coast Region to support Brikama United to participate well in the 2017 CAF Confederations Cup.

Brikama United are set to represent The Gambia in the 2017 CAF Confederations Cup after claiming the 2016 Gambia Football Federation GFF Cup title following their 1-0 win over Bombada in a well-contested final game plated at the Independence Stadium in Bakau, on 5 June 2016, courtesy of striker Sainey Bojang’s powerful second-half strike.

Brikama United made their debut in the CAF Champions league in 2012, after clinching the 2010-2011 domestic division league title under the guidance of Coach Eassa Sambou.

The Brikama-based outfit were eliminated in the second round of the 2012 CAF Champions league by the then African champions Esperance of Tunisia, after eliminating the Senegalese side US Ouakam.