(Tuesday 8th February 2011 issue)
The Management of Laico Atlantic Hotel in last Thursday presented food items and undisclosed amount of money to the children’s wards of the Royal Teaching Hospital (RVTH) in .

Speaking at the presentation ceremony, the general manager of the Laico Atlantic Hotel, Eugen Diethelm, said they have been visiting the children’s ward over the years.

The hotel usually helps the ward with some food items for children who are admitted, he said.

“Starting from 2011 we will now visit the hospital every end of the month to give some food items to the hospitalised children and their escorts,” he announced.

The Atlantic Hotel General Manager further disclosed that one hundred and fifty hospitalised children are to benefit from the donated items.

Mr Diethelm used the occasion to call on other institutions in the country to emulate his hotel by giving out food items to the needy, especially to their neighbours, “because the RVTH children ward is our close neighbour”.

Ms Veronic Ida Ngum, a nurse at the ward, thanked the management of Laico Atlantic Hotel for their timely presentation of goods to the children’s ward.

“There are some parents here who find it difficult to buy other food items of their choice for their children because of their poor condition, but this cash amount of money they have received will help them a lot,” she said.

This food will be good for the patients since most of the hospitalised children are pneumonia patients,” Ms Ngum said, while calling on others to donate food to the Children’s Ward of the RVTH. “They need support of all kinds whether in kind or in cash,” she added.

Ms Betty Kebbeh, who spoke on behalf of the beneficiaries, said the food items and money presented to them will help them a lot. 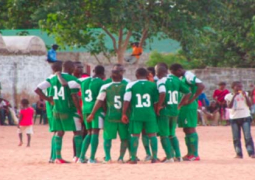 NAYCONF Flag Handed Over To Banjul