In fulfilment of their corporate social responsibility, The Gambia telecommunication giants Gamtel, recently donated hospital materials to the management of the in Farafinni (North Bank Region), at a ceremony held at the Gamtel House in .

Speaking at the presentation ceremony, Gamtel's Director of Corporate Affairs, Mr. Pierre Walter Chery, said that their company believes in the adage that "a healthy nation is a wealthy nation."

For his part, the CEO of the , Alhagie Saine, described the gesture as a way of complementing government efforts towards achieving good health for every Gambian.

He said the hospital is located in a strategic position that covers large services of people, describing it as a referral delivering services to all Gambians and even beyond.

"The demand for health care services is very high, therefore government cannot do it all," he stated.

He indicated that most of the donated items are for the children ward, which he noted, is in line with the drive towards achieving the MDGs, that is, by reducing child mortality to 75%.

Mr. Saine assured that the donated items would be put to good uses. 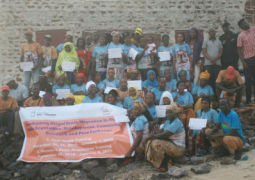