Our home-based Darling Scorpions have been eliminated from the CHAN qualifying campaign after a costly defeat in Mali over the weekend.

Though they withstood the Malians in the first-half encounter of the away second-leg match, the host Malian side proved to be too much for our boys in the second half by hammering  them 4 goals to nil, thereby telling our boys to come and prepare more for a better game and luck next time.

This sounds disappointing and discouraging but in football and in competitions like CHAN, there must always be a loser and a winner at the end of the day.  In this case, we have happened to be the losing side.  However, dialectics has taught us that in any happening, especially in bad or unfortunate ones, there are always something good to learn from it.

Although we have not got all the details about what went wrong in Mali, we are aware of the fact that our boys are just being groomed to get better and better in playing such competitions. Experience also counts.

However, that reasoning should not be nursed for our abysmal performance in Mali. We saw how things went even at home in the first leg at the Independence Stadium, where our boys were put off by the Malian side for the whole of first half, although they managed to keep up with the pace of the Malians in the second half and were able to survive by coming out with what appeared to be an appreciable result much to our advantage, where we only needed a score draw or win to make it to the other stage of the competition.

We think the right thing for us to do now is to go back to the drawing board to properly evaluate our game plan right from the strength, skillfulness or composition of our players to the expertise and management of our teams.

By and large, it is clear that we are still short of many things to get our squad up to speed with the level of performance we need to match up with outstanding teams or nations in the realm of football.

In other words we should do thorough soul-searching to see the weaknesses and strengths in our football campaign at managerial level and in the performance of our boys.

“There are no secrets to success. It is the result of preparation, hard work, and learning from failure.”
Colin Powell 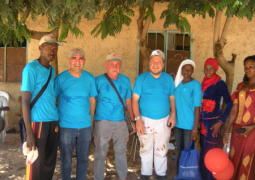