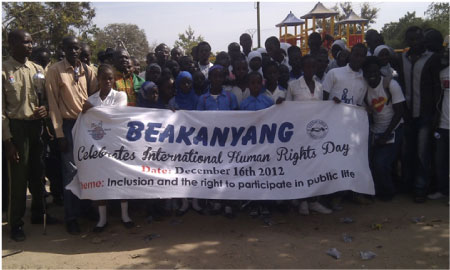 The commemoration was attended by schoolchildren, representatives of various youth organisations and Beakanyang volunteers.

The walk was led by Scout Band from Tabokotoo Juncture to Buffer zone at Tallinding.

Speaking at the end of the walk, Nfamara Jawneh, coordinator of the walk, said the theme for this year is ‘Inclusion and Right to Participate in Public Life’ and goes with a slogan my voice: ‘my right, my voice count’.

Mr Jawneh, who also doubles as Beakanyang’s secretary general, commended the celebrants for making the event a huge success.

He revealed that International Human Rights Day was celebrated all over the whole on and around December 10, and today Beakanyang joins the rest of the world in observing the day.

Tumani Danjo, President of Beakanyang, reiterated that the purpose of the walk and gathering was to raise awareness of the 30 rights contained in the Universal Declaration of Human Rights.

According to him, the International Walk started from a group of dedicated Human Rights advocates in 2009 with 12 walks in 12 countries. He added that last year this increased to 70 walks in 30 countries  and that the walk was covered on several national TV stations including two of the biggest stations in India , which broadcast to half a billion people each.

Tumani Danjo, President of Beakanyang addressing celebrants after the walk, said: “We have come to the end of this peaceful walk in honor of United Nations Human Rights Day.”

According to him, the purpose of the walk and gathering was to raise awareness of the 30 rights contained in the Universal Declaration of Human Rights.

The walk is being spearheaded by Youth for Human Rights International, an organization based in the .

“We are happy that this year it has been observed in The Gambia for the first time by Beakanyang. This activity formed part of our continued efforts at promoting human rights in The Gambia,” he said.

During the past few years, Beakanyang has been very active among other things in championing human rights in The Gambia, particularly in the Upper River Region, Danjo said.

He added: “Our sole wish is to see all Gambians and non-Gambians residing in the country enjoy their fundamental human rights.”

Madi Jobarteh, from the Association of NGOs in The Gambia (TANGO), who was the guest speaker on the occasion lauded the importance of the occasion and commended the Beakanyang organization for observing the International Human Rights Day this year.

He applauded Beakanyang for being the only organization to observe International Human Rights Day in The Gambia this year.

What Beakanyang is doing is really fulfilling the wishes of the Universal Declaration of Human Rights.

He gave a historical background of human rights and the Universal Declaration of Human Rights (UDHR).

He explained that the Declaration arose directly from the experience of the Second World War when world leaders at that time met at and began to talk about the need to create some world organizations to deal with world problems.

According to him, Universal Declaration of Human Right (UDHR) is considered the mother of all human rights instruments.

“Human rights issues have been addressed since time in memorial, but it was in 1948, when for the first time Human Rights became a global subject,” he said.

He added the whole idea of the UNDR is to promote human rights and it encourages everyone to respect and fulfill his or her human rights.

“We need human beings that value human life,” he said, adding that if we all respect the rights of one another we are respecting each other as human beings.

“If we want to live in a peaceful world, we have to respect human rights. It is amazing we have this document for over 60 years and you wonder whether this document has ever been seen by people, looking at the violations of human rights around the world,” he noted.

He implored on the gathering, especially the young people, to respect all kinds of human beings especially the physically challenged. He noted that the first article emphasised the need for equal right and dignity for all.