We are going to witness another by-election in Lower Saloum in about nine days’ time, precisely on 6 August 2015.

“In accordance with Section 42 and 52 of the Elections Act, Kaba Touray has been duly nominated through the APRC Party ticket to contest for the position of National Assembly Member for Lower Saloum Constituency.

“Modou Bamba Gaye has also been nominated through the NRP for the position of National Assembly Member for the same constituency.

“Therefore in accordance with Section 53, subsection (2) (a) of the same Elections Act, election will take place on 6th August 2015 in order to fill the position of the National Assembly Member for Lower Saloum Constituency,” a recent IEC press release states.

The stage has, therefore, been set for the election after the Independent Electoral Commission (IEC) oversee a peaceful nomination of the candidates on Friday 24 July 2015.

The battle lines are henceforth drawn between the two candidates and parties to jostle for the support of the electorate of that constituency.

This election will be another test for both parties as each candidate is hopeful of going to have the upper hand through winning the hearts and minds of the electorate.

All we are calling for is a peaceful, free and fair election to be ensured by the IEC and the candidates and supporters of both parties.

Peace is a priceless commodity that is always ensured by justice and fair play.

The IEC has been handling such situations professionally, from the process of electioneering to the voting or polling day.

So it is expected that the same momentum or condition will prevail over the Lower Saloum by-election.

We are also of the belief that both candidates will play the game intelligently and with high sense of responsibility and purpose.

The electorate, on the other hand, should not forget that we are one large family that keeps the peace, for which we as a nation are known all over the world.

The Gambia is a peaceful nation, and we must always endeavour to maintain that peace at all times – including during and after elections.

“All we are calling for is a peaceful, free and fair election.”
The Point 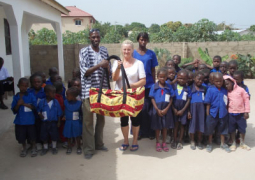