Banjulinding United on Sunday defeated Orlando Magic 3-1 in their round sixteen round tie played at the Brikama Box Bar Mini Stadium to sail to the quarterfinal of the 2016 Brikama nawettan league.

The victory has earned Banjulinding-based outfit a place in the last eight of the annual Brikama summer biggest football jamboree following their stunning win over Orlando Magic at the weekend.

The defeat saw the Brikama-based outfit out of the annual reigning biggest football fray in Brikama and will now hang their boots following their embarrassing defeat to Banjul United in their round sixteen clash at the weekend.

The Banjulinding-based outfit hope to win their quarterfinal match as well as fancy their chances of winning the 2016 Brikama Nawettan.

Orlando Magic, a household name in Brikama Wet season biggest football fray have won several silver wears in 90s and early 2000 and produce one of the finest players for Brikama super nawetan team in the previous years such as Badembo Drammeh among others. 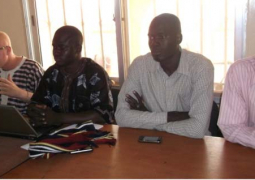