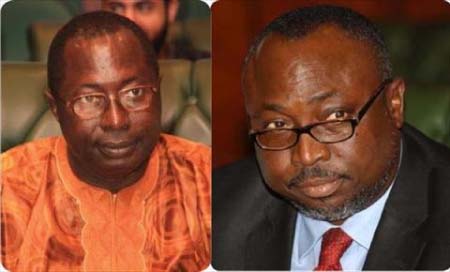 Justice Wowo and Lamin A.M.S. Jobarteh were arraigned on a thirteen-count indictment which included abuse of office, conspiracy to defeat Justice and interference with witnesses, offences relating to Judicial proceeding, to giving false informing to a public officer, which both denied.

Amie Bensouda, a senior legal practitioner, who testified as the seventh prosecution witness, told the court, presided over by Justice Emmanuel Nkea, that she has been in legal practice since 1981, adding that she knows both the 1st and 2nd accused persons, as they were judges before whom she appeared as a lawyer.

Bensouda told the court that she was there to testify about a letter written by the 1st accused person, Justice Wowo, against her and sent to the National Intelligence Agency (NIA), which falsely alleged that she was clandestinely requesting for documents at the High Court of The Gambia.

She recalled that, in November 2011, she was appointed by the World Bank as the Country Coordinator for the Land Governance Assessment Framework, which was conducted in over 32 countries and, in this, she was required to collect data from various sectors in the country, including the courts; data like how land matters were dealt with, how long they took and what were the problems.

According to her, she realised that she had to contact the registrar of the High Court for this information, and to also interview two judges who sat over land cases.

She further informed the court that she handed a document containing the list of documents she needed to her clerk to give to the principal registrar of the high court, who she knew was the custodian of court records, and this was done because, in all her career in practice, she had been requesting for documents from the registrar.

Bensouda also told the court that as far as she was concerned, the High Court registry started collecting the data for her, noting that she also had appointments to interview Justice Mbai and Justice Amadi on 30 November 2012 and 3 December 2012 respectively.

Senior counsel Bensouda added that after she interviewed Justice Mbai, as she was going out of the High Court complex, she saw one Muhammed Camara, a registry clerk, whom she asked about how far they have gone with the data collection, but he referred her to the principal registrar.

She said she then went to the principal registrar, Maraima Ceesay, who also referred her to Buba Jawo, then Sheriff of the High Court.

Jawo said to her that she should talk to the 1st accused, who was at the time the acting-Chief Justice.

She responded that it was not necessary, because it was a matter of public record. Jawo further said to her that he could approve it, but if he did, he would be queried why he did so.

Bensouda further told the court that as she was running out of time, because it was a Friday, she called her office for counsel Anna Njie to come and follow up the matter, while she went back to her office for other engagements.

‘‘Anna Njie came, but later called to inform me that the 1st accused asked for us to write, which we did and attached the appointment letter from the World Bank and the document containing the list of documents we needed.

It was after working hours, so the letter was delivered on Monday 3 December 2012, at the office of the CJ’s secretary,’’ she stated.

She recalled that while she was at Brikama to interview Justice Amadi, lawyer Anna Njie called to inform her that Joseph Wowo said he had received the letter, but he sent it back because it did not reach him through the right channel.

She was confused because the letter was delivered to the CJ’s secretary, and further asked Anna Njie to follow the letter to make sure that it was properly delivered, Amie Bensouda told the court.

Bensouda added that at night, she was arrested by officers of the NIA at around 9 p.m. in her house, and moved to the police station at around midnight.

She was informed on the following day, at around 11a.m. that her arrest was in connection with a complaint made by the 1st accused person against her.

The witness identified the letter she wrote to Joseph Wowo as the acting CJ, which was tendered and admitted in evidence, and marked as an exhibit.

She stated that Wowo wrote to the NIA against her because he was actuated by malice, and that she and her chambers suffered a lot of harassment at the Gambia Court of Appeal, where Wowo sat as the President and, as a result, she did not appear in the said court in the interest of clients she represented.

She added that there was a case in which she was appearing with lawyer Mene for the other party before the Court of Appeal. Her chambers suffered, because when she first appeared in a particular case, in 2011, at the court of appeal, Wowo made a remark that he noticed that the cost that was awarded to the other party was not paid, and that the case would discontinue the case until the said cost was paid.

She said when she stood up to explain why it was not paid, Wowo started writing, and did not even consult his colleague at the bench. He further said the court should rise, while she was left standing on her feet, and that this attitude of Wowo was not proper, and was contrary to the code of judges.

The witness further told the court that she went to tell the former CJ Agim about this discourtesy, but on the next date of the case, Wowo said that the cost has not been paid and she had reasons why it was not paid.

Wowo even without consulting his co-panelist at the Court of Appeal went on to strike out the case, and two other appeal cases of her client which were heard by different judges, independently based on reasons that cost have not been paid in the other matter, and even the counsel on the other side did not have to say anything, she said.

She further disclosed that Wowo continued to harass her and her junior lawyers who appeared before the Court of Appeal, adding that the decision of striking out the cases of her clients were done by Wowo without any party making the application.

She said that she wrote to the former Chief Justice and copied to the 1st accused person as the President of the Gambia Court of Appeal.

She later identified the said letter, and it was tendered and admitted as an exhibit.

She also identified the four orders made by the 1st accused against her clients, and they were admitted as exhibits.