The Gambia Red Cross Society, Banjul Branch, on Tuesday observed World Red Cross (WRC) day at a ceremony held at the Parochial Hall in Banjul on the theme “Youth on the Move”.

The event brought together stakeholders, volunteers, partners and well-wishers from various walks of life within and outside the city.

In his welcoming remarks at the event, Wilson Shyngle, deputy mayor of Banjul, said the modest role and continuous support for the vulnerable and humanity shown by the Red Cross is greatly appreciated by all and sundry.

The council is always happy to be associated with youth development for they have realised that is one of the component pillars that if nurtured properly will go a long way not only to speed up development goal as a nation but also to help in the sustenance aspect of it.

To develop is one thing but to sustain is another, Mr Shyngle said, adding that one of the things he likes about Red Cross is that they target the youths who are the most vulnerable and who form 60% of the population, especially in Banjul, they target the youths catch them before they grow, train them and inculcate sense of responsibility and ownership for the communities and surroundings in which they exist.

In his opening remarks, Momodou Jahateh, chairman Red Cross Banjul Branch, said they have started the ceremony since 8 May when the National Youth Commission started.

He added that the day marked an important day in the history of Red Cross Society. He also said during this year’s celebration the Banjul Branch carries a huge bunch of activities ranging from football match, quiz competition, cleansing exercise and socialization.

Momodou Jahateh added that the work is to serve humanity to the best of their ability, so as to obtain their objective in the life mission of the Gambia Red Cross Society, which is to alleviate human suffering.

He urged all to participate in the celebration.

For his part, Mr Lamin Gassama, Dissemination Officer of GRS, said if there is no army and no engagements in a form of a war there will be no Red Cross in the world today.

He added that it was as a result of these engagements of army, civilians, brothers and sisters and human beings killing each other or their fellow human beings with no one to care for them, which prompted the young businessman called Hendry Dolan to bring humanitarian assistance to the wounded in the battlefield without asking for pay.

Gassama also said the volunteers were providing relief services to chronically ill people at no cost, adding that they also see the recent transformation in young people taking music thus; passing on health messages of malaria and HIV/AIDS prevention.

According to Mr Gassama, during the Bantaba in Basse 193 piles of blood were donated to hospitals and the great part of it were taken to the Bansang hospitals to care for the vulnerable and the sick in the society. 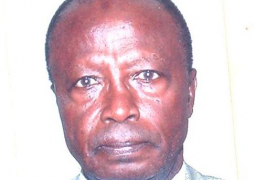 CHRISTMAS MESSAGE DECEMBER, 2019 BY THE PRESIDING BISHOP OF THE CATHOLIC CHURCH THE GAMBIA THE MOST REVEREND Gabriel Mendy C.S.Sp