The Chairman of Bakau Zonal Sports Committee, Abdoulie Bangura has described this year's Nawettan as one of the most organised competition the committee has ever organised.

Bakau's Nawettan has always been surrounded by some violence, but according to many including the President, the one which is almost nearing its climax is exceptional considering the fact that there was no major incident during the course of the tournament.

Hada as he is widely known further used the opportunity to commend the players for demonstrating a high sense of discipline and maturity throughout the championship.

He added "I am quite satisfied and impressed with the level of discipline and commitment within the players."

The 62-year-old, who was given another leadership role as the Chairperson of Bakau Zonal Sports Committee for another four-year-tenure in office during the congress held a few months ago, further expressed optimism to improve the standards of the dilapidated Bakau-Mini-Stadium as part of the committee's assignments. 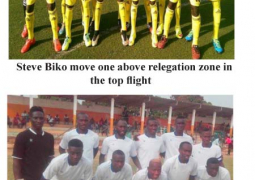