Kebba Touray, head coach of Bakau United, has apologised to fans of the club for being sent out of the pitch during their week-fifteen encounter against Real De Banjul FC at the Serrekunda East Mini Stadium on Saturday.

Jasper, as he is widely called, stated that he was only appealing for a foul committed against one of his players when the central referee asked him to leave the field during his side’s goalless draw against Real De Banjul FC in the GFA first division league.

He noted that he was satisfied collecting a point against Real De Banjul because they are a big team.

Also speaking, Alagie Sarr, head coach of Real De Banjul, said they played better than their previous game, but noted that they only had five days to prepare for the game.

He was satisfied with the performance of his team, he said, adding that they pushed forward for a goal but Bakau United were more physical than them.

He noted that the absence of Yusupha Njie, who travelled to had its effect on the game because he was part of their plans for the game.

He concluded by saying their next game would be more entertaining since it would be played at the artificial turf in .

Stakeholders in the groundnut sub-sector meet in Jenoi 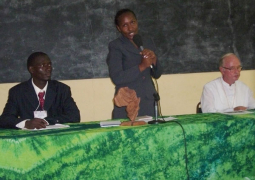