Wrestler Action is set to battle with Tas sa Yaram in the grand combat of a wrestling competition organised by Abdoulie Njie, known as Njie Gorre Promotion, at the Serrekunda West Mini Stadium on 25 May 2013.

The competition was announced at a gala dinner and face-to-face challenge held on 10 May 2013 at the Paradise Suites Hotel in Kololi by Njie Gorre Promotion.

It was attended by over ten wrestlers and supporters.

The other wrestlers to compete at the 25th May event are Mille Franc vs. GRTS, Ondateka vs. Boy Pambal, Emue Sene vs. Machacha, Aba Chyne vs. France and Mama Lamin vs. Tanga Jirr. 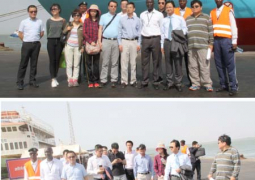