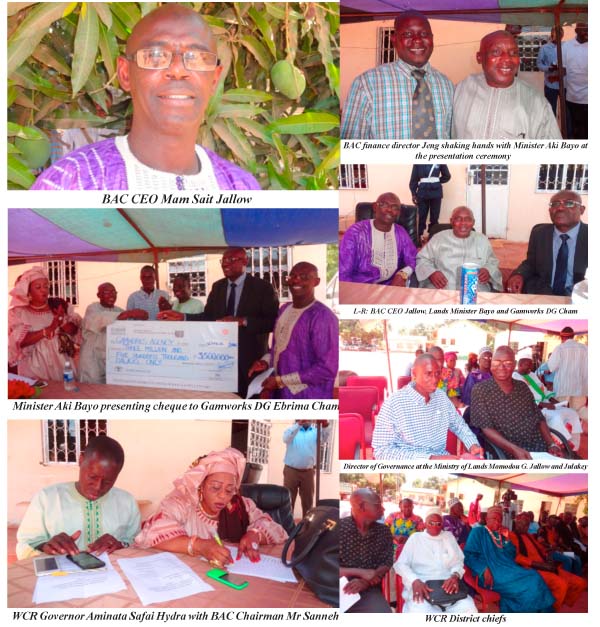 The management of the Brikama Area Council (BAC) recently presented a cheque for D3,500,000 to Gamworks as advance counterpart contribution towards the implementation of identified projects by the council.

The cheque was presented to Gamworks by the Minister of Lands and Regional Administration, Aki Bayo, on behalf of the BAC.

The presentation ceremony was attended by the BAC chairman, ward councillors, Regional Governor of West Coast Region, directors of Governance, Finance and other senior staff of the council.

In her remarks at the ceremony, the Governor of the West Coast Region, Aminata Safai Hydara, said the importance attached to the event could not be overemphasized, as the project deals directly with the livelihood of the people.

She thanked the BAC management and staff for their continued efforts and responsibility, as a revenue collecting institution providing timely and appropriate services to their people.

According to her, the remarkable project would give confidence to the community to continue paying their rates and taxes, in anticipation of more development projects.

“This is what the government under the leadership and directive of President Yahya Jammeh has always been calling for,” the Regional Governor said.

She thanked the BAC for complementing the efforts of the government in implementing projects of value, substance and great benefit to the people.

To Gamworks, she said she had no doubt in their professional ability to deliver as expected, since that was not the first time Gamworks was partnering with the BACto implement projects of need and benefit to the people.

Also speaking at the ceremony, the Director General of Gamworks, Ebrima Cham, commended BAC for the whole undertaking, and occasion marking the payment or submission of the counterpart contribution of BAC, towards the implementation of the new project referred to as “Rural infrastructural Development Project”.

Mr Cham described the new project as one of the major investment projects initiated by The Gambia government in the infrastructural development of the country.

The project is basically geared towards paving the way for the provision of more infrastructural developments throughout the country, and it is a project that has been placed under the Ministry of Lands and Regional Administrative.

“This has confirmed the confidence the Gambian leader has in the Minister of Lands and Regional Administration, in ensuring that this project would be a replica of the previous successful projects that Gamworks has been implementing on behalf of government,” Mr Cham added.

According to Mr Cham, under the Rural infrastructural Development Project, Gamwork would be implementing new projects, including the new office complex of the BAC and some new roads, as well as constructing an access road to the car park.

“Since the inception of Gamworks, the agency has been working, in partnership with BAC, in implementing various projects in the West Coast Region,” Mr Cham noted.

He said he would be looking forward to more collaboration under the new project to implement more development projects within the BAC’s jurisdiction.

He thanked the Minister of Lands and Regional Administration for his support and guidance rendered to Gamworks since its inception, as the two institutions have been working hand in glove in the realisation of their dreams.

Gamworks as an agency acknowledged the dedication and the commitment of the Lands Minister who, on behalf of the government, has been giving them maximum support in the implementation of their projects, he said.

Mr Cham also thanked the Gambian leader for his continued support and encouragement to Gamworks.

He assured all that Gamworks would continue to live up to expectations, in delivering on the new project, as well as other projects that government would entrust to Gamworks to implement.

BAC Chairman Bakary Saibo Sanneh said the presentation of the cheque was a continuation of previous counterpart contributions to Gamworks, underlining the BAC’s commitment to plough back revenues in the form of development projects to taxpayers.

The project would also go a long way in complementing the government’s efforts in providing rural infrastructural developments in the regions, he added.

The BAC chairman thanked taxpayers for their understanding and cooperation in paying tax, which enables council to pay their counterpart contribution of D3.5million to Gamworks.

The BAC Chairman also thanked the Minister of Lands and Regional Administration and the ministry for the guidance, encouragement and support to the council for the implementation of Gamworks projects in the past, as well as thanked President Yahya Jammeh for securing funding for the project.

He assured all that BAC would work hand in glove with Gamworks to ensure that the project is successfully implemented, and commended Gamworks for the confidence and trust the government has in the agency by assigning it to implement the projects.

In presenting the cheque to Gamworks, the Minister of Lands and Regional Administration, Aki Bayo, thanked Allah for giving them the ability to implement successfully on the previous projects, which are geared towards improving the livelihood of the people of the West Coast Region.

The Lands Minister saluted Presided Yahya Jammeh for his foresight in improving the livelihood of the people in the country, in all aspects of development.

He described President Jammeh as a leader who has the country at heart, and commended him for his efforts at bringing more development to the doorsteps of the Gambian populace.

According to the Lands Minister, Gamworks had been delivering quality service up to expectations, and acknowledged them for that commitment.

Minister Bayo also said his ministry would take a pivotal role in the process; hence there will be a steering committee which will involve key stakeholders for the smooth implementation of the project.

He said the BAC has made a record for paying its counterpart contribution to Gamworks towards implementing identified projects for taxpayers.

He added that the counterpart contribution had shown the commitment of the management of the council in plying back to its communities.

“This is what is expected of council,” Minister Bayo said, while describing the importance of the project.

This is all geared towards improving the economy of the country, he added.

He advised the council to put all mechanisms in place to ensure the sustainability of the projects in their area of jurisdiction.

The Chief Executive Officer of the BAC, Mam Sait Jallow, who chaired the ceremony, said the cheque was meant for the implementation of certain identified projects by the council within the local communities.

He commended the Minister of Lands and Regional Administration for his continued support and commitment towards the Brikama Area Council, and assured him that the council would continue to deliver up to expectations for more development projects. 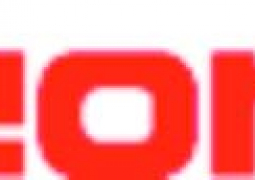