The 24-year-old former Sk. Lierse international have experienced a strange start to the season allowing him scored only 3 goals in 8 league matches. Despite the challenge, the former SK. Liese hit man came from no where to snatch the title away from his fieriest rivals, Lamin Samateh of Samger, Armed Forces, Buba Sama and Daddi Gai, both these strikers scored 9 goals for their respective clubs.

Bierhoff was named the GFA leading scorer for the first time in 2001 after netting 14 league goals before he went on to help Biko chinch their first FA cup title the same year.

And his impressive scoring records that made him prevailed over his other teammates as the most outstanding player of the team by the management of Steve Biko FC from 2001-2003.

The former Scorpion star further went on to congratulate the newly crowned GFA league champions Armed Forces for their victory, noting that they deserved the championship trophy and urged them to keep fighting hard ahead of the CAF club championship.

It could be recalled that Assan Jatta has signed a 2-year professional contract with the Belgian outfit Sk. Lierse, together with his comrade Mustapha Jarju in 2006. 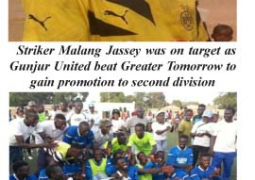