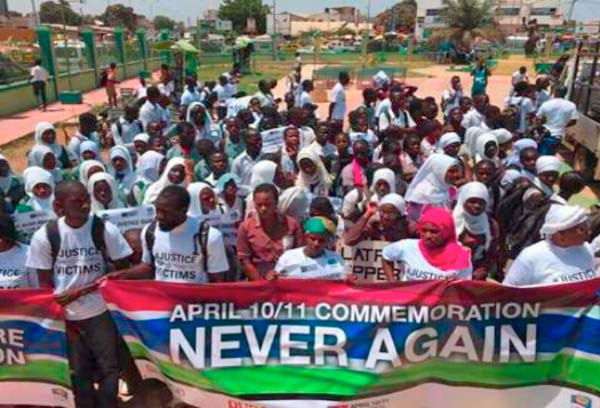 It has been almost 17 years since the April 10-11 2000 student massacre in The Gambia, but events on those two days are still fresh in the minds of most Gambians. It is undoubtedly one of the saddest days in Gambian history. The Gambian security forces fired live ammunition on student protesters resulting in the death of 14 students and a journalist and injuring dozens more.

This year is the first commemoration since the student massacre and it was took the form of a march past, symposium and musical tributes held at the Youth Monument in Westfield.

Speaking at the commemoration, the Attorney General and Justice Minister Baboucarr Tambedou said that justice should prevail for the victims and families of the student massacre.

Minister Tambedou added that they will try by all means to know who gave the order for the shooting and killing of those protesting students and that justice will be served.

Former President Jammeh was accused of ordering the shooting of the students, but the government denied the allegations. A government commission of inquiry reportedly concluded that the Police Intervention Unit (PIU) officers were “largely responsible” for many of the deaths and other injuries. The inquiry also revealed that five soldiers of the 2nd Infantry Battalion were responsible for the deaths of two students at Brikamaba.

The government stated that the report implicated several PIU officers in the students’ deaths and injuries, yet those responsible have never been brought to book.

Also to this day the Families of the victims have never been compensated by the Government and until now a remembrance day has been forbidden.

On April 10-11, 2000, GAMSU organized a large scale protest that questioned the Jammeh administration. The students demonstrated on April 10, 2000 to protest the alleged beating to death of Ebrima Barry at the hands of fire service officers in Brikama, Western Region.

Barry was a secondary school student, whose teacher had told the fire service officers to intervene in disciplining him. Ebrima was reportedly beaten, tortured and later died. Apart from the outrageousness of the fact that fire service officers were asked to discipline a student, the government failed to properly investigate the matter. The GAMSU student leadership made demands and an autopsy report (which was widely believed to be a cover up) stated that Ebrima died of natural causes. A spontaneous student protest ensued at The Gambia College, where a Gambia Students’ Union (GAMSU) sub-union existed.

While that was being discussed, a thirteen-year old school girl was allegedly raped by a uniformed paramilitary (intervention police) officer at the Independence Stadium, where an annual inter-schools sports competition was taking place. A doctor‘s examination confirmed the girl was raped and again, GAMSU pressed for answers. After a long delay to bring the paramilitary officers who were on duty at the stadium for the victim to identify her assailant, GAMSU requested a police permit to hold a public protest.

This request was denied. Realizing it was their constitutional right to protest, the student leadership called its members to peacefully march toward the capital city of Banjul. They were viciously crushed by a mixture of police and military officers. Sixteen people died, including a Red Cross volunteer/radio journalist and a three-year old child (who was killed by what was reported to be a stray bullet). Fourteen students were killed and several others were injured. GAMSU, which at the time had branches all over the country, did not back down.

Upon viewing the violent response of government to the protest of their colleagues in the city, students in the country`s only boarding high school and several other rural towns launched their own protests on April 11; and like their colleagues, they were violently quashed and several hundreds of students were detained country wide.