Yankuba Colley, the National Mobiliser of the ruling Alliance for Patriotic Reorientation and Construction (APRC) party is the latest to add his voice to the widely debated kingship issue, stressing that if Gambians want President Yahya Jammeh to be a king, he (Jammeh) will be crowned a king.

Colley, who was speaking in an interview with The Point yesterday, emphasized that President Jammeh is not telling anyone to campaign for him to become a king.

In Colley's view, if Jammeh wants to be king, Gambians will go for a referendum, and they (Gambians) will vote for him to become a king.

The APRC national mobiliser's comments followed that of Ousainou Darboe, leader of the opposition United Democratic Party, who described the forthcoming presidential election as a defining moment for The Gambia's future.

Darboe, who also spoke in an interview with The Point, said if Gambians do not exercise their right to vote and vote wisely in the forthcoming election, then they will succeed in establishing a monarchy in this country.

"We are going to declare President Jammeh as winner again in November this year. Our party is not only a party, but we are here for the interest of the Gambian people," Colley stated.

According to Colley, the opposition in the country is never prepared until elections approach, adding that the APRC party was well-prepared, since its election into office.

"We are not election-hungry; we are not here to look for only elections; election or no election we are with the people. The APRC will sweep the polls massively; whether the opposition are together as a bunch or they are fragmented, we don't care," he said, adding that even if the opposition join forces, they will never pose a threat to the APRC.

He stated: "We are just going to fulfill our constitutional rights, but the victory is a foregone conclusion. There is no place in this country where you will not notice the APRC's development. There is no constituency, no district where the APRC did not bring development."

Colley also refuted allegations that elections in The are rigged, saying that it has never happened in this country.

In fact, the President will not go out to campaign. Who is he going to campaign with?" Colley asked.

Concluding, Colley described, as an insult, comments by the UDP leader that the 2011 election will define the future of The Gambia, saying that Gambians have already defined their future. 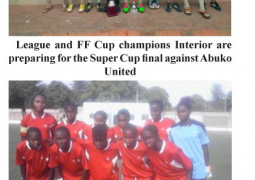