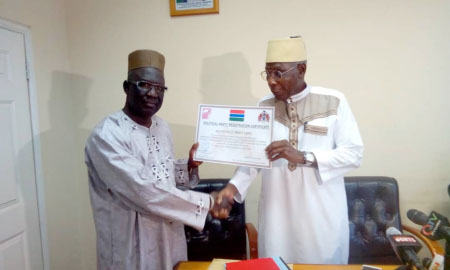 The Independent Electoral Commission (IEC) has approved the registration of All Peoples’ Party (APP) on Friday 17 January.

According to the party’s interim leader, Dr Gumbo Ali Touray, the party has a different ideology and refined thinking, representing a new beginning with a different alternative and vision for The Gambia.

Dr Touray said APP believes in genuine democracy, the rule of law, responsible governance, transparency and puts the country first. He called on all Gambians to join and support the new party.

“Our mission is to participate in the political activities of this nation. We seek no confrontation but to show and share respect and understanding among all existing political parties in the interest of national development and social progress,” he said.

The interim party leader said they appreciate the rigorous procedures they had to go through before they were accorded recognition, saying “our political philosophy is people centered, people ownership and dedication to the people of The Gambia.”

Electoral commission chairman, Alieu Momar Njie urged the party to be law abiding and follow all the rules in order to ensure peaceful elections, adding that elections would be conducted in a free, fair and transparent manner.

Chairman Njie said there is a need for every party in a democratic state to convene their congress every two years, adding that the electoral commission should always be informed of these activities. 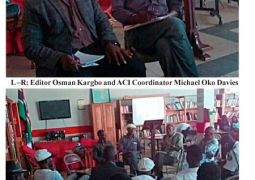