Analysis of hanging-fate of undocumented Gambians in Italy

Thousands of Gambians in Europe might face what will be known as the loss of destiny. The powers of Europe have said it is enough with migration and those wrong migrants should be filtered to give way to the right ones.

As the European Union calls for a collaborative mission to control the influx of migrants in her borders, Gambians are most likely the unfortunate migrants. As the EU continue to debate on the welfare of migrants in Europe, many things are concentrated and calls for the attention of all leaders not only the 28 member countries is also solicited.

The Europen parliament calls on the governments of the countries of origin of these migrants to help in tackling what they call 21st century humanitarian crisis.

This critical decision has the life of thousands of Gambians at the table, but will they be ever attended? Many EU considerations have found Gambians as the most illegitimate migrants and thus refused asylum.

However, many other rights link to asylum cannot also be sought by these people and this has continued to make life difficult for most Gambians in Europe.

As thousands of migrants are said to be entering into the Euro zone “every two days”, European leaders are unseated about the matter anymore.

The directorsat the immergency center of Pozzalo and Catania in Sicily said Gambians are also moving unstoppably; almost every month they receive not less than 50 Gambians and one almost every day.

TheEU meeting meant to discuss among other things the influx of migrants into Europe and their welfare, the main powers of Europe - Germany, France and the United Kingdom – have repeatedly spoken about the issues.

According to them, Europe cannot maintain this tragedy and thus migrants that did not fulfill the asylum requirement could be deported to their countries of origin.

Italy, Greece and Hungary are not taking the matter lightly and are calling on the other EU countries to help them put the issue under control.

Greece and Italy are the main entry points of these thousands of people entering Europe but the governments of these countries are now starting to put words into actions against the unsolicited exodus.

Migrants according to the Dublin regulation, must stay and ask for asylum in the first county of entrance. They are not allowed by law to move undocumented in Europe. However, since these regulations exist almost only on the papers they are written, the movement of undocumented migrants in Europe is alarming.

Fences are built and many under construction from Spain, France, UK, Germany, Greece, Hungary among others, yet the influx of migrants seems unstoppable and economically unsustainable for the EU.

Leaders of the EU will have to decide for or against the Geneva convention on whether to grant new and friendly rules to regularise easy access to papers for all migrants or to simply deport thousands of those without status. The UK, France and Germany speaking on the issue, concluded that the best procedure could be first to send those economic migrants wandering around Europe to their countries of entry and then finally to be deported back after identification.

For the undocumented Gambians in Europe, the implementation of this rule could mean a total blow in the face. But not only will it affect Gambians, it shall as to many sub-Saharan Africans.

Since The Gambia is considered a peaceful environment and Gambians are among the majority of those people recognized as economic migrants and, therefore, rejected refugee status, the coming to effect of the new regulation could mean the lion’s share of the problem for them.

The Gambia is listed among the safe countries, and thus asylum is not easily granted to its people.

With member nations (within the EU) driven by disunity among themselves and many still not wanting to welcome asylum seekers anymore, there is no hope that the forthcoming decisionswill end in favour of migrants. 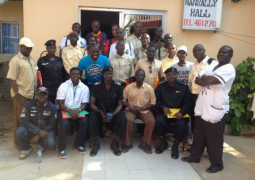