The trial involving one Alasana Hydara, charged with the offence of criminal trespass and willful damage to property Monday continued at the Brikama Magistrates’ Court before Principal Magistrate Dayoh M. Small Dago.

In his testimony, Alasana Jammeh told the court he knew the accused person, adding that on 21 August 2013, while he was in his compound, he was called by his elder brother, Musa Jammeh, to meet him on the farm as their transplanted mango trees were uprooted.

He said upon his arrival at the site, he found that 14 transplanted mango trees were uprooted by them. The accused person was inside the house but the two other boys were standing outside.

He said that while he was there with the accused person, his elder brother, Musa Jammeh, went to report the matter to the Mandinaring Police Station, stating that before the arrival of the police, the accused went and hid the uprooted mongo trees at the back of the house but it was later discovered by the police when they arrived at the site.

The accused was arrested together with the 14 uprooted mango trees and taken to the Mandinaring Police Station.

The witness was then cross-examined by defence counsel Borry Touray. 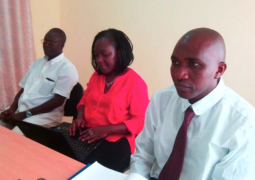