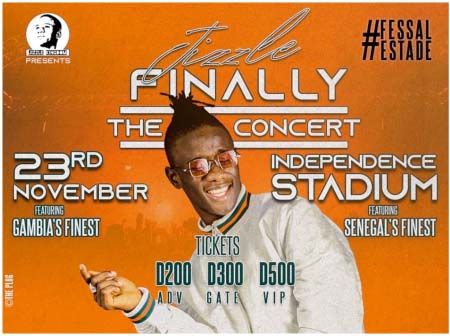 Multiple award winning Gambian  Afro-Pop sensational, Jizzle,  is expected host a mega concert where he will launch his new album ‘Finally’ on 23rd  November, 2019 at the Independence Stadium in Bakau.

The Finally concert dubbed as ‘#Fessal #Estade’ meaning fill up the stadium will feature some Gambian and Senegalese finest artistes. Finally is Jizzle’s debut that was released on 9th August, 2019 comprising twelve tracks representing the sounds of Afro pop, Afrobeat, and Afro-fuzion with elements of Hip Hop.

Jizzle said the show is going to be a show of the year and a night full of energetic entertainment.

“It is going to be a night of Gambian music, so the fans should expect the unexpected. I am coming with a different setting and different style. I am going to make sure everyone that comes that night goes home with something amazing to talk about and unforgettable. Everything is going to be under control as safety of people is going to be a priority. I am ready and I can’t wait for the day,” he assured the fans.

Abdou Busso said the show is going to be a night of entertainment featuring international Djs and artistes.

He assured that the security will be number priority during the show and the preparation is on track want to fill-up the stadium by making history.

The lyrics are very catchy with a sing along type of vibrations with topics that all elements of his fans can identify with.

As a multi-talented artiste, Jizzle has produced five songs on the album with the production from top Gambian producers Shyboy, Endy Official, and J Live Music. Machine Man Tim from the UK and J Masta from Sweden also make hot beats on the album.

He features a number of West African artistes, including Dip Doundou Guiss, Samba, Peuzzi, Bm Jaay, and Hakill from Senegal.  Shaydee represents Nigeria and Gee from The Gambia.  Jizzle is a very unique type of artist and his style is very different compared to a lot of artists. He is able to capture his audience through a variation of different languages from English to Mandinka, Fula, and Wolof.

“I am very happy with the response that I have been getting from my first album, Finally.  I feel like the whole world loves this project. The outpour of love and support for my first album has been breathtaking. I am humbled by my fans and ask that continue to buy my music,” explains Jizzle in jubilation.

Jizzle does not take for granted his natural musical ability and quality. He employs both exuberance and brainpower to pull off conscious, sweet songs viable in today’s pop-culture. Finally is a testament to Jizzle’s love for music and natural star quality.

Jizzle, also brand Ambassador of one of the leading GSM Operator in Gambia Africell has embarked on a three-week European Tour in Sweden, Italy, and Germany to promote finally.  All of his shows displayed his dynamic stage presence and performance and he is finally back home bracing up the most anticipated show of the year that is Finally concert on 23rd November, 2019 at the independence Stadium in Bakau.

Born in Bakau in The Gambia in 1989, Jerreh Jallow, popularly called Jizzle D Lyrical Kiddo is a afro-pop  and rap artist. He began singing at the age of 17 in 2009 after completing Grade 9 at Ndow’s school. He majors in rap but occasionally sings dancehall. He sings in three West African languages namely Fula, Mandingo and Wolof.

In 2010, he released his first single called ‘Over Sona’. The song highlights the plights of young people neglected by the adult world. ‘Over Sona’ is an exaggerated expression of despair common among Gambian young people.

In 2011, he dropped a second single called ‘Life Is Not Easy’. He sings are about war, poverty, young people and many other social ills.

In 2014, he released a 14-track debut mixtape titled ‘Food Is Ready’. Some of the popular songs on the album are ‘Rumpa’, ‘Mi Deh Pan Mi Side’, ‘Together We Make It’, ‘Let Stand Up and ‘Fight For Our Right’ and ‘Man of The Year.

In 2014, he won the Best Upcoming Artist of the Year 2014 category at the Gambian Entertainment Awards. In 2015 won best Collobo ‘Man of the year feat Artenola in Wa Sa Halat Music Awards.

In 2016, he was nominated in All Africa Music Award as Best artist, duo group in African hip-hop.

In 2018, he released an EP called ‘The Next Big Thing’ consist of six tracks and he embarked on a successful national wide tour in Bakau, Lamin, Brufut, Sanyang, Busumbala, Basse, Farafenni, Kanifing Brikama and Barra. He has performed in the annual open mic festival in 2015, 2016 and 2018.

In August 2019 he released his debut album entitled ‘Finally’ comprised of eleven tracks.

In September, 2019 has embarked on a three-week European Tour in Sweden, Italy, and Germany to promote finally album.  All of his shows display his dynamic stage presence and performance.

He is busy recording songs, shooting videos day in day out having performances in and out the country managed to increase his audiences beyond the borders of The Gambia into international markets. 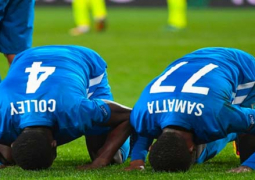