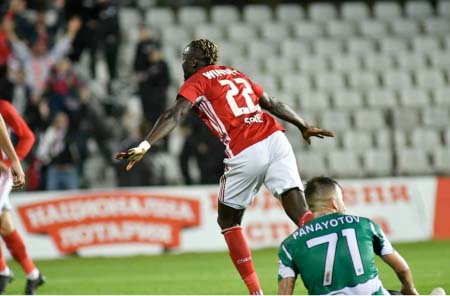 Scorpion’s attacker, Ali Sowe has scored his eleventh goals of the season for his Bulgarian club, CSKA Sofia during their 2-0 away win over Cherno More in their week-fifteen fixtures of the Bulgarian First Division League played at the Stadion Ticha last Tuesday.

The 25-year-old scored his side winning goal after snatching a late winner in the stoppage time of regulation time, just after defender, Kristiyan Malinov gave his side the lead in the 88th minute.

The goal was the eleventh for the Serrekunda-born player after fifteen appearances.

The former Gamtel/Gamcel striker, who continues to be in fine form at club level, is not part of the final list of players selected by Tom Saintfiet for the Angola and DR Congo encounters later this month.

CSKA Sofia are currently fourth position in the Bulgarian First Division table with 31 points, while Cherno More is sitting on seven position with 21 points after sixteen matches.

Ali Sowe and CSKA Sofia will next play away to Botev Vratsa Sofia, while Cherno More will go away to Slavia Sofia with both games to be played on Saturday.