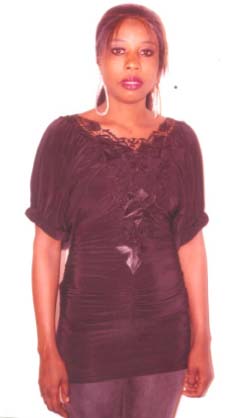 Mariama Susso, commonly known as Misma, is making waves in the music industry in The Gambia and beyond.

The 25-year-old musician currently living in Tallinding said she is a griot and her father is a musician based in the United States.

The young talented afro-manding star was speaking in an interview with The PointEntertainment on Thursday at The Point offices, where she said being a griot does not necessarily mean one should be a singer. “I did my schooling at the GTTI,” she said, adding that since she completed high school, she has taken singing as part of her life career.

Misma told Entertainment that she had released some singles and is working on others that will soon hit the market.

“I am working on a new video,” the young female artiste disclosed, saying she has attended many festivals and shows in The Gambia as well as taken part in programmes in Senegal, where she has sung with some Senegalese musicians, which has added a lot to her exposure and musical experience.

Touching on the difficulties she faces as a musician, the afro-manding artiste says music is full of challenges, “but my aim is to take The Gambia music to higher heights as I continue to work with many rap artistes”.

She called on the Gambian public to support musicians in order to develop and promote their music.  “I am also urging Gambians to be organizing shows during Koriteh and Christmas festivities to invite musicians to show their talents.

Travelling upcountry is part of her plans, provided she gets sponsorship, Misma said.