More and more organisations and individuals have continued to complement government’s effort in assisting flood victims, following the wide spread flood disasters that hit many parts of the country this raining season.

Among the recent ones to extend a helping hand to the victims was the African Muslim Agency, who last Tuesday donated food items to some 100 families in West Coast Region.

Speaking at the presentation ceremony in Brikama, the Regional Disaster coordinator, Serign Modou Joof, said the gesture came as result of the good relationship between his office and the African Muslim Agency.

He added that that African Muslim Agency had been a long time partner with the regional disaster management office in Brikama.

According to Mr Joof, when contacted this year, the Muslim Agency also came up with 100 secondhand clothes, 100 bags of rice, 100 five-litre gallons of oil, and sugar with two kilogram of milk for each beneficiary.

Mr Joof described the African Muslim Agency as “real partners in development”, saying the donation came at a time it was highly needed.

He noted that the African Muslim Agency had been contributing “immensely” towards the improvement of Arabic education in the country by building mosques, an orphanage and other structures that are geared towards empowering the people of The Gambia.

He described the African Muslim Agency has a humanitarian organisation that aims at helping the most vulnerable people in society.

Mr Joof also thanked the African Muslim Agency for their “generosity”, assuring them that their relationship would continue to go from strength to strength.

He used the opportunity to appeal to other agencies to also help the victims, saying: “It is not only the government that is responsible for supporting the victims; everybody has a role to play.” 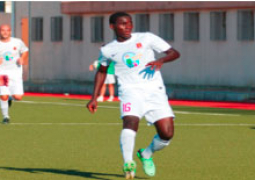