The Agency for the Development of Women and Children (ADWAC), in partnership with the Department of Forestry, recently donated materials to combat any unexpected outbreak of bushfire in the region as part of their anti-bush fire campaign in the region.

The donated materials include rakes and cutlasses, to use as firefighters and also create fire belts around the communities and other protected areas to prevent bush fire from entering.

Speaking at the distribution ceremony held in Brikamaba, Lamin Jarjue, energy and environment project officer who doubles as project manager for livelihood at ADWAC, revealed that, as rainy season is approaching farmers are busy clearing and gearing up their farmers ahead of the season.

During the process, he added, fire might go out of control and if not stopped early could lead to disaster.

This was one of the reason these materials were given to them so that, they could prevent and protect the environment and natural resources from being ruined by fire, he said.

Mr Jarjue called on the beneficiary’s communities to tighten their belts in the fight against bushfire and even domestic fires and illegal activities in the forest.

Alhagie Sanyang, regional forestry officer for CRR, spoke at length on the importance of protecting forest and its resources, adding that the protection and prevention of bushfire was not the only responsibility of the foresters but all and sundry.

He reminded the gathering that some years ago, the forestry department had distributed firefighting equipments, including bicycles to all the communities in the region to ensure bushfires are history in the Gambia.

He hailed the efforts of ADWAC in complementing the efforts of the forestry department for promoting environmental governance and sustainable livelihood.

Aja Fatou Trawalleh, lady councilor for Brikamaba noted that the attainment of food security could only be realized if the environment was protected from bushfire and illegal logging.

“The partnership with ADWAC would contribute towards strengthening community response in the management of forest,” he added. 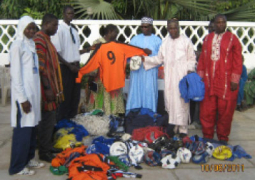