FGM activist and founder of Safe Hands for Girls, Jaha Dukureh, has called on the new government to affirm publicly that Female Genital Mutilation and Child Marriage laws passed by the former regime are here to stay.

Jaha was briefing journalists on the upcoming FGM Media Award held at the GPU secretariat.

“We are even more challenged as journalists and activists because the former president passed the law on FGM before he left,” she said.

Jaha said: “I have met with the new government and the president has assured me that the law is not going anywhere but we have not heard them publicly.”

She said it was very crucial for the people on the ground to understand that this was not a Jammeh law but a Gambian law.

She added that the new government, saying it indoors was not enough, hence they need to come out in the press or release statements.

According to Jaha, the more government remained silent, the more people would continue to say that the law is a Jammeh law and continue to flout it with impunity.

For her part, Lisa Camara, Global Media Campaign coordinator for Gambia, said there are lots of challenges they faced with religion as the major one as some people still associate FGM with religion.

“We are one of the few organisations that directly give grants to journalists to do research on FGM cases and publish it or talk about it on the airwaves,” she said

Also speaking, the GPU Secretary General, Saikou Jammeh, said: “We are very proud and happy that the media in The Gambia have over the years been supportive of the campaign to end FGM in the country.”

He said he could remember when ex-president Jammeh left office that some people were reporting in the papers that some other people were calling for the ban on FGM to be lifted.

“It means that there are lots of girls will be at the risk of getting cut since they are calling for the laws to be scrapped. It will also give prominence to a lot of FGM issues in The Gambia,” he said.

The Press Union Code of conduct for journalist does not allow journalists to promote harmful traditional practices, he said. 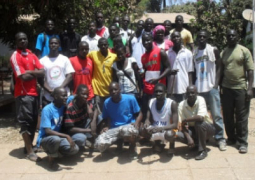