Lamin Touray, manager at AB RENT A CAR, on 1 December 2014, continued his testimony under cross-examination by Garba Cham, a representative of the plaintiff Seedy Cham.

While answering questions posed by Garba Cham before Magistrate Jallow of the Kanifing Industrial Tribunal, Lamin Touray told the tribunal he gave the plaintiff his employment contract in 2009.

“Why didn’t you suspend him when he did not sign the contract in 2009 until 2013?” Garba Cham questioned the witness.

“Because he would not sign the contract in 2009,” Touray said.

“I am putting it to you that his suspension was for putting his claim against the defendant for using his image on billboards and flyers, advertising the company without his consent,” Garba told the witness.

“That is not correct,” said Touray, adding that the plaintiff was suspended because he was absenting himself and misusing the company’s money and vehicles.

“I am putting it to you that the reason for suspending him was that the plaintiff refused to adhere to the employment contract. which was effective since 2009,” Garba challenged.

“That is correct,” Touray replied.

“Is it correct that the contract should contain sick leave, holidays, etc,” asked Garba.

“I know that,” answered Touray.

“Is it correct that the contract does not have the provision of holiday and sick leave and hours of work?” enquired Garba.

Lawyer Salieu Taal, representing the defendant, said he was objecting to the question.

He said the claim before the tribunal was for unlawful termination, adding that there was no claim for sick leave or holidays.

He argued that in the absence of such claims, Garba’s line of questioning had no relevance.

He stated that the absence of this provision in a contract does not deprive an employee of his rights.

Garba replied that the question was not about claims but employment contract, adding that the refusal of the plaintiff to sign the contract was the cause of his suspension and dismissal.

He further said he was talking about the provision.

The magistrate then asked the witness to answer the question.

“The provision might not be in the contract. If there is anybody who benefited from these provisions, is the plaintiff,” Touray told the tribunal.

“I am putting it to you that the suspension of the plaintiff for two weeks for refusing to sign the contract is unlawful,” Garba stated.

Lawyer Taal then stood up and said he was objecting to the question, adding that the question was unfair and unethical.

But Garba argued that there are provisions in the law for signing contracts.

Lawyer Taal did not agree with Garba; he argued that Garba did not quote or relied on any law of the Labour act.

He said Garba perused the Labour Act, which is contrary to what Garba said, adding that the issue of unsigned contract was not material in the case.

The case was adjourned until 16 December 2014, for ruling. 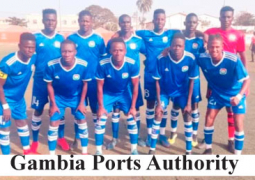