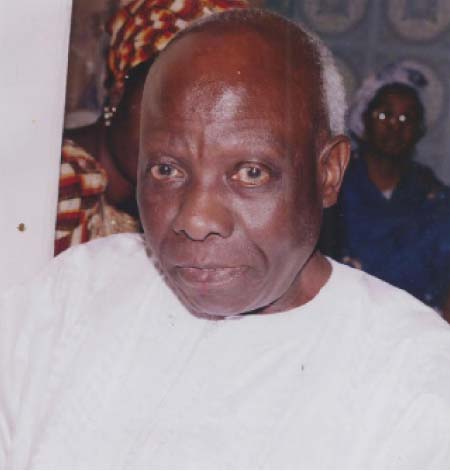 In The Name of Allah, The Entirely Merciful, The Especially Merciful. All praise is due to Allah, Lord of the worlds. Sovereign of the Day of Recompense. Please guide us to the straight path.

Indeed we belong to Allah, and indeed to Him we will return. (Quran Surah 2: 156)

Born Nov 18th, 1939 in Banjul, The Gambia, passed away peacefully surrounded by family on a bright Friday morning Nov 7, 2014.

He is preceded in death by his wife Ajaratou Ya Faatou Dampha, and parents:

Survived by his wonderful, caring and loving wives:

Our father spent part of his early years in both Banjul and Brikama. Whilst attending school, his great father passed away, a loss he never forgot and would often talk about. His father’s younger brother, MamDawda Sowe became his mentor.

Having been exposed to the deep religious and cultural atmosphere prevalent in his father’s home in Brikama, He underwent the same rigorous discipline regimen in the home of his mentor MamDawda Sowe at No. 63 Perseverance Street in Banjul.

His commitment, selflessness and dedication would eventually earn him the position of “Magi Daara” (koranic teacher’s assistant) in the free Daara (koranic school) operated by MamDawda for the benefit of family, neighbors and other community members. He was blessed to have developed very early in his life, a sense of responsibility and balance by concentrating on his western education and also assisting in managing the affairs of the old man’s Daara. He graduated from The Methodist Boys High School in 1959 and joined The Gambia Civil Service in 1960.

In the mid 1950’s, The British colonial government sensing that Gambia’s Independence was inevitable, decided to create a cooperative concept of entrepreneurship to help poor people out of poverty and to create wealth in their communities’ .The Department of Co-operation was created to register, oversee, supervise and manage Co-operative Societies. It was against this backdrop that our Father felt it prudent to join the Department of Co-operation as a Co-operative Officer in 1960.

Under the colonial government, he quickly rose through the ranks after having been trained first at The Co-operative College in Ibadan and at Loughborough College in Leicestershire, UK. Our Father was amongst the early group of Gambian civil servants being trained to take over various executive and administrative positions previously occupied by British Nationals and their foreign expatriates. He was promoted to Assistant Registrar of Co-operatives in 1967 and thus became the youngest Gambian Senior Civil Servant which was a rarity in that period. He would eventually head The Co-operative Department in The Gambia as The Director and Registrar of Co-operative Societies. He would gracefully retire in 1996 but left an indelible footprint of accountability, management and leadership style which was nothing but exemplary.

Allegations of mal – administration, mismanagement, as well as discriminatory practices in government departments and other public bodies including the security forces were being addressed by The Gambia Government. In 1997, The Office of the Ombudsman was created and our Father was appointed as The Honorable Ombudsman of The Republic of The Gambia: 2007-2013. A position he held with honor and dignity and a deep conviction to bring about Justice, probity and equality to the lives of ordinary Gambians.

Our Father had a distinguished public service career, but his deep religious conviction, privately and publicly as a member of The Banjul Council of Muslim Elders, love of family and friends and his selfless service to others had enabled him to have a positive outlook on life and was known by the many people he crossed paths with as a wise, humble and gentle soul.

We also remembered as he dealt with life’s challenges along the way, but he never forgot faith, courage or patience. His faith, tenacity, courage, humility and patience always helped him overcome.

Along the way, we also show gratitude to many of his protégés, whose deep respect and admiration for the man they came to know was unparalleled. This includes Pa Sulay Sowe, Jr. Pa Tayib Sowe and nephew Sheikh Tijan Gaye. He also enjoyed excellent relations with families of the in-laws notably The Wally, Njie, Dampha, Dioury, Bah, Jagne, Jallow, Shyngle, Ceesays’, Faal and Fofana families etc.

There were also lighter moments spent with us the children laughing and joke telling but always reminding us of prayer times. Barjen Amie Sowe misses him dearly. We remembered the playful and friendly exchange of teasing remarks between the two and we would burst into laughter, all in good spirit. We also remembered the countless occasions when we would congregate around him and absorb admonitions from him. Some of us fondly used to refer to them as “The Marathon sessions with Dad”. The hindsight of passing years and growing older slowly revealed Dad’s real value.

Allah has promised those who believe and do righteous deeds, for them there is forgiveness and great reward. (Quran Surah 5: 9) Our father was our example of faith, grace, integrity, truth, hope, patience, kindness, humility, selflessness, service and loyalty. The Gambia has lost one of her greatest sons.

Dad’s life was a gift from ALLAH, and now that He wants it back, we have no right to complain. Papa we miss you dearly. You will always be our hero, your life was a gift to us all.

MAY ALLAH GRANT YOU Jannat-ul-Firdaus, AMEEN.