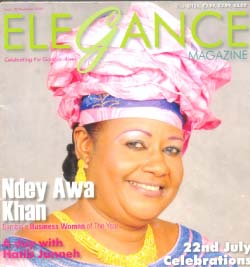 A new magazine that captures a slice of everything in life is out in the market, poised to creating awareness.

Elegance magazine, whose maiden edition is on newsstands in the markets in The Gambia and abroad, has positioned itself to satisfy the varied interests and reading taste of people from all walks of life. Not only that, the magazine also has the editorial contents and ingenuity that can sell your adverts first-class the world over.

The magazine covers feature articles of international standard, issues of couples and singles, lifestyles, fashion, health & food and other events, capped with breaking news that keep you on top of the happenings.

Behind this magazine of international scope and standard is Chilel Sarr, an industrious Gambian who has had a feel of both sides of the world – at home and in the West.

Chilel, a graduate of Communication Media and Journalism, believes her magazine has all it takes to make a difference in this great nation of The Gambia and beyond.

"The first edition of the Elegance, the long awaited magazine is out," said Chilel, in the editorial piece of her maiden and latest edition.

She continued: "This is our magazine, addressing our issues, through our perspective. The Gambia has a lot of talents and this is now our time to shake off the dust and come out. We have all what it takes to make a difference in this great nation and even beyond the borders."

Speaking in an interview with The Point Tourism and Entertainment writer recently at Sierra's Salon at Sabina Junction, Chilel, CEO and publisher of the magazine, said Elegance magazine is here to serve the general public as well as to promote culture, tourism and other sectors.

The magazine is currently online and majority of the people may have seen it but getting it or knowing what it is all about is the other side of the equation, which is of importance.

The magazine was established in November 2010 when the first issue was published; although it has been launched on the website since June.

The website was launched in Birmingham in England, she said, adding that the magazine covered a bit of everything.

"If you look at the content you will see that we have featured articles where we have interviews, where we have Elegance choices, celebrating Gambian culture as well as Elegance breaking news," she explained.

"We also have fashion, health and food events; facebook, which is obviously the well-known social networking. We have not focused on one specific area but we do touch a little bit of everything."

Touching on her educational background, Chilel says she studied Communication Media and Journalism at the University of Birmingham.

"I worked with few other people like Mam Harr Njie who is a PhD holder in Bio-chemistry and also worked with Sandiky, who is normally helping me to do the interviews. We have different people in different parts of the world that are also part of the magazine," she said, adding that the magazine is out to impact countries like London, America and The Gambia.

"So we are trying to make it international," she said. "The first issue was designed and printed in London but since I am in The Gambia for now, I am working on the second issue but still everything is designed in London.

"What makes Elegance to be different is we want to be stable. Since I started this magazine I see to it that all comments are considered because even before the publication was out, people have trust in me. They knew that I am going to come out with something because it was first advertised everywhere."

Chilel said that when the first issue was out most of the copies were sold out in The Gambia and others were sent to countries like Sweden, Norway and America.

"We want the support of Gambian young entrepreneurs who are in the business. Everybody knows that a good magazine is not two weeks' job. We have covered some interesting stories and events all over the world," Chilel said. 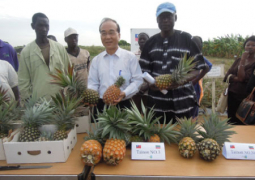 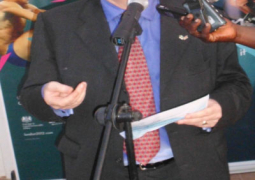