This year has been a challenging one for journalism in The Gambia. So far, it has been one court case after another, culminating last Thursday in the conviction and sentencing to a two-year jail term of six journalists. It all began with the false publication charge against The Point newspaper this February. Barely had that case got underway when the citizenship of the paper's managing editor Mr Pap Saine was deemed suspect.  He was arraigned before the Banjul Magistrates' Court to prove his citizenship. He was eventually acquitted and discharged - just as the false publication was to be dropped later.

But Mr Saine hardly had time to celebrate his court victory. He had scarcely reached The Point offices when he was invited to the National Intelligence Agency (NIA) headquarters for questioning over a publication in The Point's issue of 15 June 2009. He was there with Sarata Jabbi-Dibba, Ebrima Sawaneh, Pa Modou Faal and Emil Touray. Later they were joined by Sam Sarr and Abubakar Saidykhan. Sarr, managing editor of Foroyaa newspaper, had published the same article a few days earlier.  All of them were later charged with a six-count charge of conspiracy, sedition and criminal defamation.

While this case was going on, another journalist was also sentenced to a fine of fifty thousand dalasis for publishing false information.

Only one of the seven journalists (Abubakar Saidykhan) charged with conspiracy, sedition and criminal defamation was set free as it shown during that he was simply trying to take photos while his boss Sam Sarr was arrested.

It is superfluous to go into the details of the trial here; it was like a soap opera that held the nation spellbound while it lasted. Every night, people stayed glued to their TV sets to catch up on the latest developments in the case, just as they besieged newsstands every morning to keep abreast of the turns and twists in the case. In the defining moments of the trial, both Saine and Sarr asserted that they published the said article "in the interest of democracy and press freedom", as enshrined in the Universal Declaration of Human and Peoples' Rights, and to promote the free flow of information as the country's constitution upholds divergent views. Both men were strong and resilient and inspiring and noble in their most trying moment yet.

We are grateful to all those who stood shoulder to shoulder with us during our ordeal - friends, relatives, and well wishers. Your presence, words of encouragement and material support were the tonic that kept us going throughout the trial - and still keep us going into the unknown future. Sooner or later we shall look back to Thursday, 6 August 2009 as the day when Gambian journalism was re-built rather than broken.

"Nothing happens to any thing which that thing is not made by nature to bear." 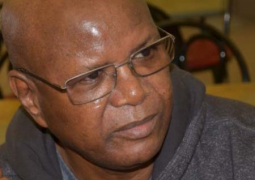