A boost to road infrastructure

The feeder road rehabilitation project linking the communities of Bafuloto, Gallayo, Kubuneh and Makumbaya in the Kombos to Brikama was officially launched on Saturday, at a ceremony held in Bafuloto village in the Kombo Central district in Western Region.

The start of the project is very timely and relevant since the rainy season is fast approaching. We encourage the contactors to ensure that the project is speedily implemented.

As we have said before in this and other columns, a good road network is vital infrastructure in the country. It promotes economic growth and speeds up national development.

We understand that the project will cost D2, 819 010, and is being funded by the communities themselves, in partnership with the Brikama Area Council (BAC) and the Saamasang Federation, among others.

This is a clear testimony of the commitment of all the stakeholders, and since the people are actively involved, we hope it would be a success story.

When completed, the road is expected to ease the movement of people and vehicles to and from the cosmopolitan town of Brikama and beyond.

We have learnt that this kind of partnership, in such an unprecedented venture, aims to improve the livelihood of the people living in these communities.

According to officials, the project is a historic opportunity for Child Fund The Gambia and its affiliated federations in the sense that it is the first time that the organisation through the federations is getting engaged in a project of this nature.

We, therefore, commend Child Fund for partnering with the communities concerned to make a meaningful change in their lives.

A poor road network, which was the situation in the area before its inception, does have a negative impact on the livelihood of rural people everywhere.

Thus, the availability of a good road network system in any country is an essential ingredient for speedy national development, as it facilitates the smooth movement of people, goods and services.

The rainy season is almost here, a time when bad conditions of most of our roads become a source of major concern, and a topical issue in many corners of the country.

Indeed, it is during this period that many of the roads become impassable in many parts of the Kombos, because of their deplorable condition.

This project will, no doubt, ease the movement of people, goods and services during the rainy season - a time when the road conditions in these areas make life unbearable for most people who live away from the highways and main roads within the Kombos.

We would want to bring to the attention of the authorities responsible that roads in some parts of the country are in deplorable conditions and they need to do something about them.

It is common knowledge that during rainy season, roads in most areas in the Kombos are washed away and often flooded with stagnant water.

To make our roads user-friendly, we need to rehabilitate them in preparation for the rainy season and it’s imperative to keep proper maintenance of roads, since we cannot afford to live without a good road network.

Once again, we renew our call for area councils to act now that the rainy season is almost here, by upgrading major feeder roads for the convenience of the people.

We reiterate that every effort should be made, and every resource employed, in putting our roads in a good state with all possible haste, before the rains arrive. 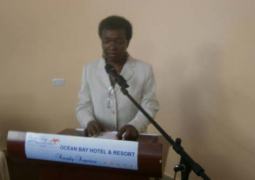