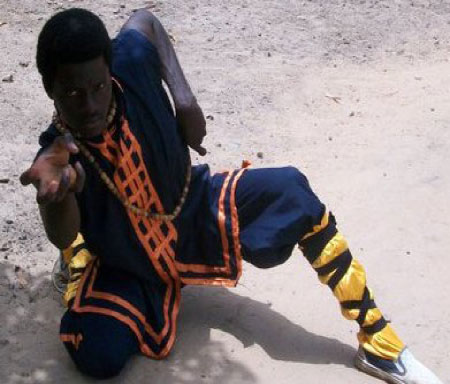 Six (6) Gambian Kung fu combatants recently left for , and are participating in the third African Wushu Championships taking place from 8 to 14 September 2011, Pointsport has gathered.

The week-long Kung fu championship organized by the Senegalese Kunf fu Association would be boosted by the presence of the president of the International Kyung fu Federation, deputy Minister of General Administration of Sport of the Republic of China and the Vice Chairman of the Chinese Olympic Committee, said Ebou Sanyang, public relations officer of the Gambia Kung fu Federation, who spoke to this reporter in a recent interview.

The arrival of these high profile sports personalities is the first of its kind since Kung fu was established in , officials of the Gambia Kung fu association disclosed.

Pointsport also heard that Wang Xiaolin Secretary General of Wushu, Wang Yulong Chairman of the Technical Commission of the International Federation of Wushu and twelve other renowned personalities and experts from Chinese Kung Fu Wushu will all be in attendance.

They will also give lectures on refereeing, among others.

“The Gambia Kung fu combatants are also expected to take part in combat (fighting), Tao, among other events, for the first time  in history.

“We are very grateful that the kung fu is surviving despite lack of financial ability, which is hampering its progress,” said the PRO of the Gambia Kung fu association, Ebou Sanyang, also known as Jet li.