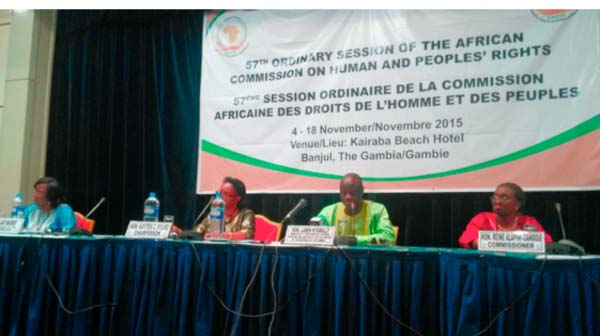 The 57th Ordinary Session of the African Commission on Human and Peoples’ Rights (ACHPR) under way in Banjul has reiterated its strong condemnation of coups and other conflicts in Africa.

The two-week session, which commenced yesterday at the Kairaba Beach Hotel, brought together state delegates representing the state parties to the African Union, representatives of the national human rights institutions, members of the African Commission on Human and Peoples’ Rights, non-governmental organisations and civil society organisations, as well as members of the diplomatic and consular corps.

Addressing the session, Hon. Kayitesi Zainabo Sylvie, chairperson of the African Commission said the commission was concerned that military coups are rearing their ugly head again and again in the continent.

Last year it was The Gambia and only recently Burkina Faso, she said, adding that they are happy the voice of the people of Africa is united in opposing any unconstitutional changes in government.

On the basis of their motto: “Human Rights-our collective responsibility”, she noted, they were urging all Africa to rally together to ensure that Burkina Faso is the last casualty of this phenomenon.

She said they also congratulated Nigeria, Lesotho, Tanzania, Egypt, Sudan and Cote d’Ivoire for holding peaceful elections recently, and exhorted other countries that would soon be conducting elections to follow suit in order to avoid its people pain and suffering that comes with electoral chaos.

In the last four years, she added, they have managed to consider more state reports and reduce the number of communications backlog.

The commission had focused on expanding its collaboration networks by increasing the number of National Human Rights Institutions (NHRIs) with affiliate status and the number of civil society organisations (CSOs) with observer status, she stated.

The network had greatly enhanced the performance of the commission and through their work, the commission had performed very well in the past few years by enabling them reach corners and crevices of the continent.

“There are a number of ‘soft’ laws and protocols on various human rights issues that the commission is also proud to have developed during my tenure in office.”

Among these, she pointed out, are guidelines on the conditions of arrest, police custody and pre-trial detention in Africa.

In his statement at the session, Hon. Lamin Nyabally, Secretary General and Minister for Presidential Affairs, said member states are urged to fully implement the provisions of the African Charter in a bid to promote and protect human and peoples’ rights on the African continent.

Over the years, he said, the commission, entrusted with the mandate to promote and protect human rights on the continent, had been working vigorously to fulfill its mandate by ensuring that member states not only comply with the provisions enshrined in the African Charter, but also to do so to the benefit of the citizens.

He said the sessions are to take stock of the successful implementation of their obligations under the African Charter, and urged all state parties and stakeholders present to contribute immensely to the rich deliberations and provide support to the work of the commission.

SG Nyabally further said that among the gains The Gambia had made in fulfilling its charter obligations geared towards promoting and protecting human rights, are transforming the living standards of its people which had led to a decline in the poverty rate in the country.

Other achievements had been recorded in education, health, agriculture, women and youth empowerment since the onset of the Second Republic, he said.

He said gender equity, equality and empowerment of women and youths had always occupied the agenda of the Gambian leader.

According to him, the recent pardon and release of hundreds of prisoners among them people who are convicted of heinous crimes like treason by the Gambian leader are a manifestation of respect and compassion for the people of The Gambia and beyond.