The 53rd Ordinary Session of the African Commission on Human and Peoples’ Rights opened yesterday at the Kairaba Beach Hotel.

The two-week long forum comes a day after the closing of a three-day Forum on the Participation of NGOs in the 53rd Ordinary Session of the African Commission on Human and Peoples’ Rights and the 27th African Human Rights Book Fair.

The NGO forum, which brought together over 100 human rights defenders and activists, representatives of civil society organizations, UN and African Union officials, was aimed at fostering cooperation among and between NGOs, as well as with the African Commission, with the aim of promoting and protecting human rights in Africa.

Speaking at the opening ceremony, Lamin Jobarteh, Attorney General and Minister of Justice, said this year not only marks 26 years of existence of the African Commission in promoting human rights on the continent, but also marks a momentous occasion for the continent; the 50th anniversary of the formation of the Organisation of African Unity, and 11 years of the launch of the African Union.

‘It is therefore an opportune moment for the whole of Africa to come together and work towards promoting a developed, peaceful, secure and stable Africa, where the respect for human rights and dignity is inherent, a condition which is necessary for achieving the Millennium Development Goals,’ he stated.

While appreciating the efforts in safeguarding our beloved Africa, Jobarteh said as a continent we are still facing a number of challenges that disrupt our progress towards development; such as internal conflicts in Somalia, Democratic Republic of Congo, Central African Republic, assisting in the identification of proceeds of suspicious criminal conduct and the combating of money laundering and other terrorist financing.

He told delegates that the Government of the Gambia has also commenced consultations on the establishment of a National Human Rights Commission with the assistance of the Commonwealth Secretariat.

‘It is hoped that this process will be expedited and The Gambia will soon be among African states that have a functional independent National Human Rights Commission,’ Jobarteh said.

Catherine Dupe Atoki, chairperson of the African Commission on Human and Peoples’ Rights, said the session takes place on the eve of a momentous occasion in the history of the African continent, as we celebrate the Golden Jubilee of the birth of the pan-African unity in the formation of the OAU.

‘Over the 50-year period since the OAU was established, Africa and indeed the world have witnessed momentous developments, with significant political, economic, social, cultural and technological changes,’ she stated.

According to her, the human rights situation in Africa over the past six months presents a picture of an amalgam of situations; whereas gains have been made in a number of situations, serious violations of human rights persist on the continent.

The launch of the African Governance Platform, he added, is a unique opportunity to strengthen capacity and deepen our understanding of issues of human and peoples’ rights, democracy and governance, which constitute our African shared values. 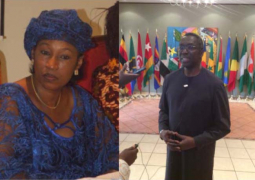