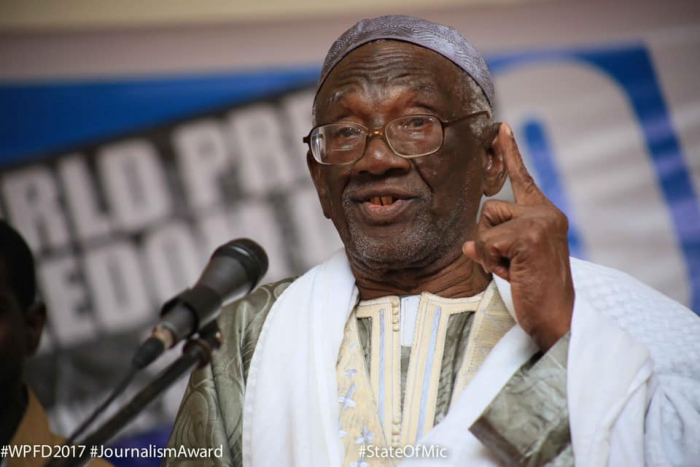 When  my good friend Alhaji B.M. Tarawalle aka Ba Tarawale died on Monday March 1, The Gambia lost its last surviving journalist of the immediate pre-and post independence era, who was also the founder member of at least five political parties between 1958 and 1975, our pioneer lexicographer and one of the first non Aku qualified teachers.

Alhaji Ba was a dedicated teacher who joined the colonial teaching service in the late 1940s, having graduated from the Georgetown Teachers College just before it was moved to Yundum in 1951. He taught in many schools in the then Protectorate, but most notably, at the main Ballangahr village, ‘the Chief’s Town’, as he would tell me when I reminded him that there were a dozen villages in one cluster that carry the name Ballanghar! There, he basked in the glory that another Gambian patriot E.F Small, OBE, had left in those villages as far back as 1918. Mr. Small had refused to suffer colonial oppression and confronted a British Official which made him lose his job as a Methodist missionary, and thenembarked on an illustrious nationalist career that culminated in Gambian Independence on 18 February 1965.

Alhaji Ba stayed at Ballanghar School for so long that he formed the first corps of educated rural Wollofs. He also learned the demotic Saloum Wollof such that I always wondered if he was born Wollof. ‘No, I was born Bambara, but I love Saloum Saloum and I am happy to speak and know their language so well’, he once confided in me here in Banjul.

He returned to Banjul in the late 1950s and together with Alex Jorbateh and Edrissa Samba created a political pressure group called the Committee of Gentlemen. It helped to incubate the 1959 anti-colonial protests in Bathurst during the visit byAlan Lennox-Boyd, the British Secretary of State for Colonies. The protesters wanted, and got, a new constitution of universal adult suffrage. This protest was the first of its kind in UK’s ‘most loyal colony’ The Gambia, since the 1929 dock workers strike. This was his nascent work as a Gambian nationalist. Soon, he veered into the inchoate PPP of Sanjally Bojang, and helped to draft the party’s first Manifesto. When D.K Jawara, our future leader, was made head of the PPP in late 1959, he chose Alhaji Ba, already known for his impeccable writing skills and polemics, to be his press secretary.

As Jawara’s press aide, Alhaji Ba tormented P.S. Njie’s U.P in the newspaper columns in Bathurst and abroad, especially in the UK mainstream press.  Now Jawara was Leader of Opposition and P.S was Chief Minister. Alhaji Ba used his penmanship to publish harrowing descriptions of P.S Njie’s short reign to the London press, especially in the highly regarded LondonTimes.

In 1962, he created The New Gambiaas the PPP’s newspaper. Then in The Gambia, each party had a newspaper to help to further your agenda. The U.P had the United Party Newsletter edited by I.A.S Burang-John; the Muslim Congress Party had African Unity edited by the great writer and journalist Pierre Sock(1940-1990). I once asked Alhaji Ba if this was good for Gambian journalism? ‘Yes, every party should have a mouthpiece, a newspaper to generate and hold the party record for posterity, and also forward the party message. You see, Hassoum, there is certain type of political news it should be the purview of only the party press. You cannot expect private press to give saturated political coverage to any party. It exposes the private press to political ploys and machinations’.

Indeed, in those days we had in Bathurst the party press, the private press like Dixon Colley’s Nation; The Gambia Echo; The Gambia Outlook of M.B Jones; Mbakeh Njie’s Progressive newspaper; R.S Allen’s The Gambia Onward; the subterranean or seditious press like Tonya and Fansoto; Government press like The Gambia News Bulletin and Radio Gambia and of course foreign magazines circulated well. This small country had more than 12 independent publications coming out regularly.

In 1966, Alhaji Ba fell out with Jawara. He ceased been his aide, and then turned the popular New Gambia as a virulent anti PPP paper. But the paper was very progressive, especially in its grande reportage of women’sissues, and theAmilcarCabral liberation war in Guinea Bissau. In the summer of 1967, he went again into politics forming the National Convention Party(not to be confused with S.M Dibba’s) with another angry journalistMbakeh Njie. The party was stillborn; Mbakeh was bought over into the PPP and Jawara made him the PPP paid hacker, now using his once independent minded Progressive newspaper into a veritable PPP mouthpiece. In late 1967, Alhaji Ba created another party called The Gambia Peoples’ Party(GPP) (also not to be confused with Assan Musa Camara’s GPP of 1986). This party was also soon destroyed by PPP machinations. Doggedly, Alhaji Ba helped create the Peoples Progressive Alliance(PPA) in the summer of 1968 together with four former and highly disgruntled PPP ministers like Paul Baldeh, the brilliant Trinity College, Dublin, graduate; S.S Sisay, the quondam Finance Minister and KCA Kah, a former Minister of Health and Yusupha Samba, also a former Minister. Sadly, this party was also doomed: within months, Paul died, aged only 32; Kah and Samba were doing time in prison? for various offences, and S.S Sisay, through respected Mandinka elders, was apologizing to Jawara seeking re-entry into the PPP! Alhaji Ba was the last to leave the crumbling PPA.

‘Why did you spend 30 months through three parties trying to remove Jawara’, I once asked him at his home. ‘Jawara betrayed me. I was fighting back. He knew full well what I was capable of doing to remove him from power’.

Alhaji Ba reverted to the newspaper to topple Jawara. He revived The New Gambia and let loose a barrage of damning expose about unpaid labour at one of Jawara’s farms. Alhaji Ba called it slave labour. He is intrepid enough not to write ‘alleged slave labour’. This irked the all-powerful and highly feared Jawara’s Justice Minister, Hon. M.L Saho.

Hon. Saho, who exercised more power than even Jawara himself, called in the police on Alhaji Ba. Charged with defamation and libel at first, Saho added spreading of false information to the charges, and before long he added sedition. Now, not even Amnesty International, then barely ten years old, could prevent the eventual jailing of Alhaji Ba at Mile Two. Jawara, Alhaji Ba would tell me, was not happy that the Justice Minister had gone the whole hog of sending him to Mile Two. But Saho was too powerful.

By 1972, he was out and then went into exile in Guinea Bissau where he witnessed the PAIGC liberation heroes enter Bissau triumphantly to reclaim their land from Portuguese rule. He told me how the PAIGC asked all those who collaborated with the Portuguese, especially its feared secret police, the PIDES, to line up in the centre of Bissau to confess, and then ask for forgiveness or risk going to jail.

In 1981, Jawara called him back home. ‘Sir Dawda called me to State House one day after the Kukoi coup. He asked me to work with him again, that I should forget the past. I replied that I am too elegant to bear grudges. I told him he is now my friend. He asked me to start a new PPP party paper called The Gambia Times. I did so working with J. Saidy and S.A Bakarr’, he told me.

At this time, he also helped to create the Non-Formal Education unit of the Ministry of Education. Here Alhaji Ba worked to formalize the alphabets of Gambian languages, and wrote a 20,000 entries dictionary of Mandinka-English, the first of its kind in scope. Until he died this week he was busy reading the proofs and galleys of an enlarged edition, which I hope will be published posthumously.

Alhaji Ba remained an active writer to his death. He loved the pen and understood what it could do and undo; he also knew how much the pen has helped to free our country from colonial domination into a prosperous Republic. His ilks in journalism are now all gone. They were engaged and engrossed newspaper men who confronted the colonial and immediate post colonial state with hefty determination on the side of poor and weak and downtrodden. Alhaji Ba and his kind did not hide behind journalese, political correctness or staid clichés like ‘alleged’; they were passionate to say it as it should be said, and then await to be taken to court. This is why their names will be remembered by historians always as patriots of the nation who stood by the people in telling their story. I will sorely miss my friend and critic, Alhaji Ba. To his friend and family, especially Steve, and to the GPU, I offer my sincere condolences and pray that his soul rest in peace.

A giant tree has fallen

A giant tree has fallen and with it we have lost an entire library, a scholar, public-intellectual, lexicographer, journalist, activist- Alhaji Baa Trawally wore many hats. And, today, Ballangharr (and Saloum) mourns her most illustrious "adopted son," head-teacher, father, uncle and historian. He knew our parents and family histories and recounted them with relish. I knew him as a boy- smartly dressed in brown khaki-shorts, boots, and knee-high socks, donning a caskett; he had a larger than life persona, and towered over all.

Gambia has lost even more- the irrepressible and dynamic political actor and commentator, who "spoke truth to power." Blessed with a long and productive life he remained intellectually versatile, armed with a razor-sharp memory. A consummate storyteller, he weaved several strands in a narrative, seemingly lost in detail just to pick-up from where he branched off. I will cherish the afternoons Honorable Kebba Touray, and I spent with him, as well as the interview Baaba Sillah and I had with him several months ago.

Alhaji Baa Tarawally will be remembered for having helped forge the Gambia's political, and print-media histories and more. And, his legacy lies in his commitment to struggle(s) to improve lives of the poor, the marginalized, and those who suffered unfairly from government repression. He remained a critic, and perhaps an outsider to the corridors of power to the very end.

His finest legacy may yet lie, however, as the founding-teacher/head-teacher of Ballangharr School in the 1950s. He loved Ballangharr and her people and would speak effusively about his formative years there in preparation to take on Gambia and the world. He also bequetes as his scholarly legacy to this and generations to follow a nuanced and very rich, Mandina-English Dictionary. Rest in Peace Uncle Baa. 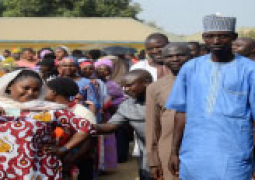 No To Foreign Troops. ECOMIG Should Leave. Now.

GAMBIA AT 55: A CONSUMER REPUBLIC