Contest for the soul of Africa: who bears the blame?

Africa weeps profoundly mercilessly as it is being dragged to Hell by the owners in connivance with the enemies. What a merciless soul! What a pity for a motherless child! Taking a closer critical analysis and evaluation of Africa major dilemmas and the socioeconomic and political quagmires leading to abject mental and social poverty, social upheavals and a gradual imminent yet another colonization, one may not be wrong completely to equate the overlapping entanglements and weeping for survival in Africa as emanating from two classes of actors. The first is African Youth and the leadership whilst the second are the conceited friends of Africa.

In the real sense of national or continental growth and development, there is no continent that can proudly boast of any form of growth and development be it political, economic, and technological among others with the youth playing lesser roles or are nonchalant towards fundamental crucible for development. Most developed countries of the world have youths at the helm of affairs and the youths in honesty do not allow any form of disconnection from the realities of governance that is catalyst for development in their actions. Unfortunately, there seems to be a different scenario in Africa with regards to youth honest involvements in governance and developmental process owing mainly to self-inflicted causes. Most African youths are self-politically alienated ideologically to offer thoughts good enough for delivery of good governance or engender any form of meaningful peaceful revolution that could bring about good governance in respective countries in Africa. This calls for questions and answers!

To provide answer, it is pertinent to realize that most African youths have penchant for immediate gains and as such become willing tools that enhances all forms of maladministration as a result of mental poverty that eroded foresight from rational thinking. A continent where average youth avoids reading  but only pick up books to pass examination in schools rather  than reading for knowledge is abysmally bad, poor and blockage to any sense of meaningful innovations, creativity; good sense of judgments and paradigm shift that could bring about development of any form.

Being deprived of logic to sound reasoning and consequently entangles in wishful thinking, African youth buys and sells tribalism and religious fanaticism at the expense of good governance and future gains. Average African youth is comfortable with bad governance provided it is his or her fellow religious members that are at the helms of exploitation of collective resources without a blink for collective future. African youth jubilates, celebrates and wallows in abject poverty provided it is his or her kinsman that presides over the fanfare of maladministration and exploitation of common wealth. In fact, even the few African youths that by privilege ascend political positions, wallow idealess and compromise with the systems in promoting political corruption and manipulations forgetting primary responsibilities to the country and by extension the continent.

With these attitudes, African youths only become ready-made collective ambassadors and promoters of failure of leadership and good governance in Africa. Thus, African youths jointly endorses poverty, ethnic politics and religious fanaticism as a way of life either by action or inaction as such become collective willing tools in the hands of corrupt political demagogues and their foreign allies. Of course, poverty and crime become alternative to morality. How can a continent grow and welcome massive productive and meaningful development where the youth that should have engendered impetus for growth and development have taken the back seat owing to ineptitudes. The age long parlance that the future belongs to the youth has really not found no relevance in Africa. The youths are mostly not prepared given rooms for the recycling of old faces in governance all over the continent. When will there be attitudinal change on the part of majority of the youth of this continent to the future from today?

In similar tone, African leaders’ attitudes to governance are yet other weeping concerns.  Most African leaders fail on daily basis in many capacities to deliver good governance to the people. In place of good governance are misplaced priorities, monumental corruption and blurred policy prescription for development. Thus, subjecting national economy to state of moribund as the citizens languish in abject poverty; making criminalities alternative to survival in Africa. Without shame these set of leaders reappear seeking re-elections or rather perpetuate in powers using the instruments of the state against the will of the people.  Such leaders in Africa are the coronavirus that need collective effort to decimate from power with all vigor but unfortunately, they are the one that enjoy the patronages of ethnic chauvinists, religious bigots and youth unionisms.

The global outbreak of coronavirus (COVID-19) brings to fore the terse failure of governance in Africa as it exposes index of high level rots in medical facilities in most African countries. Most African countries are between sixty and ten Years of independents from colonial rules. Thus, any government or leadership that cannot boast of number equipped hospitals with major medical facilities such as beds, drugs, ambulances, among others for the health care of the citizens has not only failed but indebted to the people and the continent. They are the COVID-19 that ravaged Africa’s wealth in connivance with the Americans, Europeans and Asians allies over the years in their actions and inactions. At all cost for no reason, many African leaders continue to dismember African flesh into many divisible parts in their lack of unity and cohesion to pursue common goals for the benefit of the continent. This no doubt eases another round of partitioning and sharing Africa by foreign allies offering solicited and unsolicited loans which in a sense are the engine rooms for corruption and compromise that is quickly driving Africa.

With this come the conceited friends of Africa. Having found most African leaders predilection to loans even without using the proceeds for gainful development in the continent, the Western and Asian partners have their eyes and ears fixed on African resources through a complex decoy foreign policies. The number International Organizations and NGOs being sponsored by the Americans , Europeans and Asia continents unchecked by Africa leaders underscores the level of naivety of some African leaders in the protection of the continents. How many African leaders or at various level of organizations have taken time out to speak in one voice or transparently ensure that important foreign policy engagements are debated at the legislatives and government authorities before embarking on the agreements with respective countries?  How many African leaders have also taken step further to examine future implications of many policies signed with foreign allies?

No continent actually cares for Africa’s welfares if not what the continents or group gets from Africa and her people. It is the resources, the fertile lands, crude oil, gold and diamonds, irons, cheap human capital that are the crowns for contest by the allies. The cold wars, the quarrels, the disagreement and agreements, alignment and non-alignments, reconciliations and what have you among the powers are but for the soul of Africa. Their vaccines must find their ways to Africa, their foods, their media and technology all must be for Africa and nothing more! Unfortunately, many African leaders continue to engage and rely on the marriage of inconveniencies as a way of policy whereas the engagements have not yielded any reasonable dividends over time, rather suffocated the continents and dispossessed her of natural endowments broad day light.

There are series of reports of Chinese dominants in African affairs in full force in recent times. In all corners of Africa countries, there are Chinese offering all categories of aids in finances and otherwise a metamorphosis of China-African Policy or One China Policy for Africa.  At the seventh Ministerial Conference held in Beijing, in 2018 tagged FOCAC, many African leaders nailed the coffin to bury Africa and tied African future to China for the rest of the 21st century. The Chinese policy was bluntly spelt out as Chinese authorities in clear terms noted that the Summit was meant to put forward the specific vision on building a China-Africa community with shared future and consequently announced measures to strengthen China-Africa cooperation in the future. How many African policy makers returned home to take critical examination of these measures before appending signatures? Today, in West, South, North and East Africa, there are Chinese presences with their businesses and properties whilst African leaders pay lip services or nonchalant attitudes to Chinese gradual inversion of all sectors owing to certain policy agreement. What are these agreements in real sense? They are metaphors for occupation of Africa cum accessibility to her resources.

China is dragging African soul to Hell with loans and many African leaders seem not to consider the future consequences of the loans on the nations and the continent at large. The continual patronage of the loans without recourse to the future palpable implications on fragile non-industrially sound economies across nations of Africa is as good as opening the doorways wide for the second most brutal and pathetic form of colonization of Africa and her people! After suffering first colonization from European, it is the turn of China from the look of things consequences of outbreak of Coronavirus COVID-19 to take Africa on in another form of colonization. The current diplomatic overtures between China and Africa despite xenophobic attack on African citizens in China and other Asian countries is a pointer to new form of dehumanization that requires collective strong condemnation.

Unfortunately, many African leaders correspondingly shy away from such nationalistic responsibilities to her citizens due largely to certain inertia emanating from wrong policies engagement with China. Consequently, Chinese own lands, properties, controls governments and oppositions, own economies, control technology and media in Africa; infest the world with coronavirus for ease of taking ownership of Africa in the name of palliatives and other aids.  Of course, there are awaiting African leaders who consider grants and palliatives from neo-colonizers than raising voices against impending economic and political rape being practiced by China and other allies in Africa. It is heartbreaking that a continent that is naturally endowed with nearly all the resources in the world wallows in economic trajectory and backwardness in all spheres of developments.

It is appalling that leadership failure becomes a nomenclature use only to describe most African leaders as against counterparts in other continents of the world. It is morally bankrupt to understand  that the enormous wealth in Africa is controlled by few whilst verse majority languish in squalor,  live under tattered roofs, without good roads, hospitals, industries, good water to drink, no school, no job among others. With the aforementioned going on in Africa, what more is better than endless pursuit of Africa’s soul to Hell?

As the 1884-1885 Berlin conference is about to repeat itself, may be this time from Asia, in a more devastating dimension, who do we blame for the soul of Africa going to Hell, is it African Youths, the leaders or the conceited friends of Africa? Why finding answers to the questions, it would be morally right to commend the efforts of few African leaders who in their individualities are taking giant steps to address some of the lacunas in Africa already. Therefore, it is instructive for African leaders in all areas and youths across boards to come together; takes deep breath and flashback at developments in Africa since political self-governance, assess roles and ask the last question, who betrays Africa in action or inaction and who bears the blame? 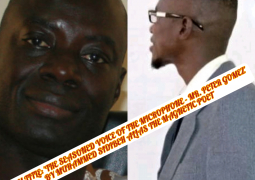