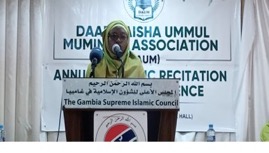 The annual Qur’anic confab was organised to nurture scholastic talents among members of the association.

Speaking at the conference, Sheikh Omar Ceesay, Chief Executive Officer of the Islamic Institute for Education and Development (IIED), under whose organisation DAUM was established, highlighted the merits of the event as empowerment through education.

“Part of the reasons for this activity is to motivate members of the women association on their efforts to learn and share knowledge of the Quran and practices of the beloved Prophet of Islam. This is also to reassure parents or guardians and husbands who allow their girls and women to join the Daara that their efforts are not in vain.”

Kawey Njie-Lette, chairperson of Aisha Ummul Mu’mineen Association (DAUM), said the Daara comprises female students of all ages and from all walks of life including those in both the public and private sectors.

“Our members comes from all backgrounds and among us are students, mothers and role models united in the search for knowledge in order to make the society much more conducive for human living.” she said.

She revealed that women are mothers, who the society cannot go without, thus the need to search for knowledge that will benefit them in this world and the hereafter.

Sharing experience from the annual confab, Salimatou Sabally, a member of the Daara expressed delight with the skills she gathered during the recitation of the Qur’an within a short period of her enrolment at the association.

Fatima Sowe, Public Relations Officer of DAUM, described the event as one of the initiatives meant to foster friendship and sisterhood among members.

Sowe noted that other events include speech competitions and lecture series among different groups of members meant to stimulate the culture of reading and research on any topical issue.

Daara Aish Ummel Mu’muneen Association is a non-charity organisation that has existed for the past 25 years. It caters for the need for girls and women in the learning and teaching of the Qur’an with support by the Busumbala-based Islamic Institute for Education and Development (IIED).

The teaching sessions conducted on Thursdays and Fridays evenings (between 4 and 7 pm) formerly in Pipeline are now conducted at Al Farooq Mosque opposite the Q-Cell building. 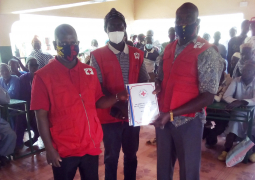 Beneficiaries of The Gambia Red Cross Society (GRCS) unconditional cash transfer support have commended and thanked them and their partner for their assistance. 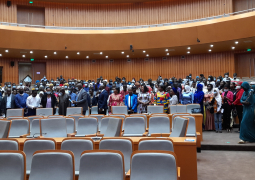 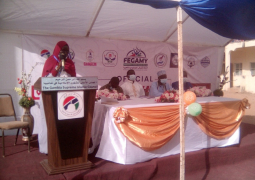 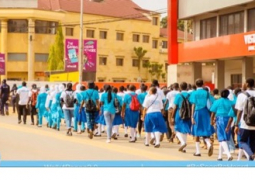