Gambia’s former Intelligence chief, Harry Sambou, in his testimony on Tuesday denied having been part of discussion that facilitated the disappearance of Daba Marena, Ebou Lowe, Alpha Bah, Manlafi Corr and Alieu Bah.

Sambou explained that he was informed that Marena was allegedly mentioned as a member of a planned coup.

The witness testified Marena was brought by Tumbul Tamba to be handed over. According to him, that was the last time he heard from him. “And one morning, I had a call from Lang Tombong Tamba to witness a meeting with security heads held at IGP’s office. During the meeting, Tumbul said Daba Marena, Ebou Lowe, Alieu Bah, Manlafi Corr and Alpha Bah escaped from their vehicle at the time of their transfer from Mile 2 to Janjanburreh due to an assault on their vehicle."

He added that Tamba told them to write a press release and later inform President Jammeh.

He told the commission that Tamba was very much aware of the disappearance of Marena and colleagues, saying he was at the center of things.

He added that when they visited Jammeh to inform him about the matter, he called them a "bunch of fools" and dragged them out of the place.

He said the Ndure Cham abortive coup panel was formed under the directive of Jammeh and in consultation with General Tamba.

"Momodou Hydara was the one who represented the NIA at the panel as chairman and he would report to me every day and I would in turn report to the president."

According to Sambou, the suspects were tortured to extort information from them, which he made Jammeh aware but he laughed over the matter.

Sambou further stated that Jammeh wanted an incriminatory report rather than factual, saying all members of the panel was aware of torture of suspects.

"I compiled the report of the investigation and submitted it to the Ministry of Justice and Office of the President with recommendation attached to it. I knew that the report was false but it was my duty to submit."

"if Jammeh had interest in a particular case at the High Court, he would just call the judge to influence the outcome of the rulings."

With regard to the Freedom newspaper saga, he said Jammeh heard reports that the newspaper wrote an article about him and his government.

The witness said Jammeh tried to get Lamin Cham, Malick Mboob, Lamin Bojang, Duta Kamasu and Kebba Kanji in custody at the NIA for about three months.

He added that he knew that they were tortured to get the information they wanted from the detainees, saying they got their instructions from Jammeh.

Counsel Faal put to him that he could have resigned to avoid giving illegal instructions, but Sambou said he couldn't resign because of the threats. 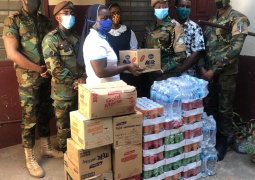 The Ghanaian Troops based in Barra as part of the ECOMIG force have donated assorted soft drinks and packed food items to the children of the Catholic Diocese of Banjul to celebrate this year’s Christmas festivities. 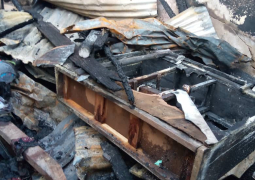 A recent fire outbreak has caused extensive damage to the Kinteh Family of Manjai in the Kanifing Municipality. 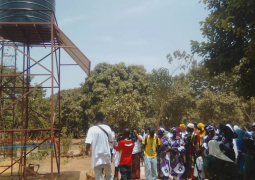 Busura Nema in the West Coast Region recently inaugurated a new borehole project at a colourful ceremony held at the village in Kombo Central.