The Geneva Centre for Security Sector Governance (DCAF) in partnership with WANEP Gambia last Tuesday held a regional dialogue in Janjanbureh, Central River Region as part of efforts to strengthen awareness creation on peace building ahead of the forthcoming presidential election,

The objective of the regional dialogue is to promote security sector responsiveness and accountability in the framework of elections in The Gambia.

The regional dialogue accorded participants the opportunity to discuss issues relating to achieving peaceful elections, and the role of security forces before, during and after elections.

The dialogue was attended by chiefs, Commissioner Police in CRR, Councillors, Director of SIS CRR North, women and others dignitaries.

Sheriff Abba Sanyang, governor, Central River Region, described the forum as important and timely. He added that it is important that people are sensitised prior to the elections to ensure peace and stability continue to flourish prior, during and after elections.

He highlighted that without peace and stability there cannot be any meaningful development. He appealed to participant to make best use of the knowledge gained as well as share it with those not fortunate to attend.

Bakary Jam Jawo, chief of Janjanbureh welcomed the initiative and called on security forces to execute their mandate by ensuring peace and stability before, during and after elections.

Mamadou Bah, WANEP representative, advised people to listen to the Independent Electoral Commission before declaring any results during the December 4th elections.

He also appealed to people especially youth and women to go and cast their votes peacefully and go back home and listen to IEC’s declaration of results. 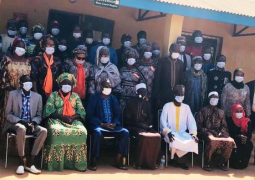