The first lady of Sierra Leone, Mrs Fatima Maada Bio, has called on Africans to champion issues that will give women voices and freedom. She made this statement on Saturday at a press conference held in Tamala.

Madam Bio was invited to The Gambia  by the American International University in West Africa and conferred an Honorary Degree of Doctor of Humane Letters on her in recognition of her outstanding humanitarian and philanthropic intervention across the globe.

Speaking to the press,  Madam Fatima stated that as first lady of Sierra Leone, she was on record to have hosted one of the biggest peaceful protest marches against gender and child abuse, adding that the campaign was not only attended by her counterparts in the region but raised international attention to the issue of rape and gender abuse.

"This marks the start of my flagship ‘Hands off Our Girls’ campaign. In 2002 I also launched the biggest award ceremony exclusively meant to celebrate and promote women which was the Gambia Women of Excellence Award which championed issues that give women voices and freedom," she noted.

Madam Bio described the Hands off Our Girls initiative as the biggest and most impactful child rights campaign that led to a presidential declaration of national emergency on rape and sexual violence and the ultimate review in strengthening of sexual offence Act.

She also highlighted the launch of the free sanitary pads distribution campaign as an offspring of Hands off Our Girls Campaign and to complement the free quality education initiative of the Maada Bio led Government of Sierra Leone.

"It's unfair to see school girls not going to school because they can't afford to get sanitary pads. Menstruation is natural so this should not warrant any girl to stay out of school," Lady Bio says.

Madam Bio, however, highlighted that her greatest strength is her ability to achieve any goal she sets; stating that some say is divine, people close to her say it is pure undiluted hard work while others insist it is a combination of both divine intervention and hard work.

She said she played a major role in the establishment of the first Special Court that is now being used to prosecute rape offenders in her country and the surroundings, and that she is currently working with the first lady of Liberia in fighting rape because perpetrators do take off and hide so their collaboration make it easier to trace them. 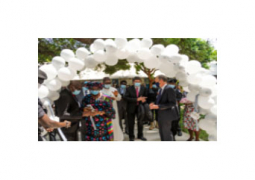 The Ministry of Health on Friday confirmed two new coronavirus cases in The Gambia. The two cases were both Senegalese, bringing the total number of confirmed cases to 20 in The Gambia and one death. 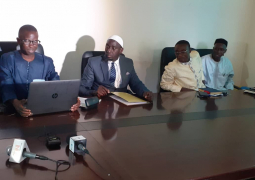