ABC Upper and Senior School, a feeless private school at New Jeshwang, which has been in existence for about 10 years now, surrendered itself to government since resumption of the 2021-2022 academic year a month ago. Reliable source points to financial difficulties as the main cause. 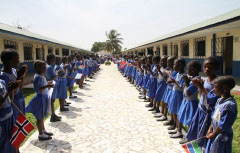 The school was built about a decade ago by a Norwegian non-profit organisation known as the Butterfly Friends, which is now a household name around the community of Ebo Town and Jeshwang. The charity has been running the school in terms of finance, providing all students with learning gears, ranging from school uniforms to books, bags and other materials all for free. Steadily, the school has been building its name as a reputable center for basic learning with high performance over the years, bagging two aggregate 6s in last year’s GABECE.

Nevertheless, the school’s regular provisions to students have been declining over the past years, and finally, the financial support by the organisation has been entirely terminated. Only the Nursery and Primary remains in the hands of its founders.

Since the resumption of schools, the school lacked teachers. This has led to some petty commotions among students, which has resulted in some problems.

“There is no problem here. People make things seem as if there is a problem, but there is none; people don’t just want changes. The school has just been handed over to the government and the government is working to stabilise things once again. So, we don’t expect things to work so smooth just like that,” the new principal, Mr. Mendy clarifies.

He maintains that there would be teachers soon, perhaps, before the end of the week; a claim backed by documents from MoBSE, which he tendered to this reporter for a glance during an interview over the matter at his new office.

Banjul, The Gambia —Contrary to the misrepresentation of facts on the funding modalities of the new headquarters, Town Halls and allied facilities of the Banjul City Council (BCC), The Gambia Government states categorically, that this particular development is an output of the Rural Infrastructure Development Project (RIDF) benefitting all the Municipalities and Area Councils across the country.