NCCE urges citizens to be law-abiding, desist from abuse of  social media

Ansumana Ceesay, senior programme officer at the National Council for Civic Education (NCCE), has reminded women and young people to be law-abiding and desist from the abuse of social media and not to be allowed to be used as political tools to do acts that are inimical to peace.

The Gambia is set to hold presidential elections in 80 days, the first since the ousting of an authoritarian regime.

Mr. Ceesay said the election will be a pivotal moment to consolidate and cement the democratic route of The Gambia.

However, he added that it is also coming at a time when the country in deeply polarised.

“There is a rising tide of ethnic and religious-based hate rhetoric on the airwaves and social media,” he pointed, saying those pose the risk of creating social and political instability that can derail the country’s progress and cause anarchy.

Ceesay made these remarks on Tuesday at Mansakonko during a community dialogue initiative among women, youth and community leaders/structures in Lower River Region.

The dialogues held in Lower River, Central River and Upper River Regions were funded by UNICEF through the United Nations Peace Building Fund.

The dialogues centered on the roles of women and youth participation in governance and peace building.

About 240 participants (women, young people & community leaders) across the selected regions benefitted from the training.

The theme for the dialogues was: ‘Women and Youth Involvement in Governance and Peace Building, December Polls Focus’.

The activity followed similar engagements that the NCCE recently rolled out – the training of school youths on leadership, civic right and duties to prepare them for transition to adulthood and citizenship including school and public good management, meant to nurture patriotism and responsible citizenship among young people.

He expressed NCCE’s commitment to continue facilitating trainings and dialogues of this nature to build harmony and promote participation in the society.

“We will also continue with our determination to build and consolidate a mature political culture in which all citizens regardless of gender and age are more aware of, and fully exercise their rights and responsibilities, as well as participate effectively in nurturing and broadening our nascent democracy,” he further said.

He noted that studies have affirmed that including and partnering with women and young people foster a more sustainable peace. 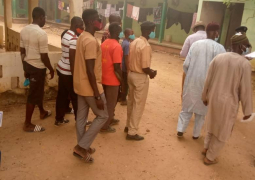 After a visit at the Central Prison and other prison installations last year, the Standing Committee on Defence and Security of the National Assembly felt it was necessary that the livelihood of the prisoners and prison officers be upgraded.