Police in Farafenni in the North Bank Region (NBR) have arrested one Mutal Gaye, a native of Sinchi Madi village for reportedly killing , a 10-year-old boy, The Point has been reliably informed.

The suspect is currently detained at the Farafenni Police Station as investigation into the matter continues. A source familiar with the matter and who spoke to The Point on condition of anonymity confirmed the development to our reporter.

According to our source, the suspect and the deceased had a bitter confrontation on Monday morning.

“The suspect decided to pick a sick and hit the deceased  on his rib. Unfortunately, as the suspect attempted to hit the little boy with the sick it suddenly pierced into his (boy) rib and he started bleeding profusely.”

Our source added: “The deceased’s family decided to rush him to a nearby health centre. However, when the situation got worst, the boy was on Tuesday rushed to Farafenni General Hospital for proper medical attention. Sadly, he died yesterday between 11 a.m. and 12 noon,” our source stated, adding that the suspect is currently detained and helping the police with their investigation. 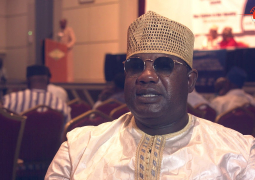 A renowned businessman, founder and CEO of Gach Global, Abubacarr Jawara, continues his testimony in the Gam-Petroleum trial that is being heard before Justice Haddy C. Roche at the High Court in Banjul.

The Gambian Embassy in the Kingdom of Spain has revealed to The Point that they are negotiating with airlines to fly back home more Gambians-stranded abroad due to the coronavirus pandemic by the end of this week.

After having confirmed a total number of 10 positive cases of coronavirus in the country, the Deputy Director of Health Services Dr. Mustapha Bittaye yesterday in a press briefing disclosed that four-patients have been treated, recovered and set for discharge.

The Gambia government has denied allegations that it accepted bribery from the European Union in exchange for deportation of migrants to Banjul.