This followed the complainant’s testimony before Principal Magistrate Isatou Janneh-Njie of the Kanifing Magistrates’ Court.

The indictment bill presented by Sub-Inspector Jammeh before the court on behalf of the Inspector General of Police indicated that Bully Sannoh and Sheikh Sanneh sometime in the year 2017 at GAM Housing office complex, in the Kanifing Municipality of the Republic of The Gambia and diverse places within the jurisdiction of the honourable court, with intent to defraud, and by false pretence, induced Lamin Mboge to deliver to them the sum of D2,700,000 under the pretext that they legally own a plot of land measuring 500m X 500m they offered to sell which pretext was false at the time. They denied the allegation.

Under cross-examination, defence council Sissoho asked the complainant, Lamin Mboge, whether prior to the sale contract, he knew Sheikh Sanneh. He responded in the negative and stated that he met him on the day they signed the contract.

Mr Mboge was further asked whether he had a contract with Skeikh Sanneh. In response, he said he did not but it was Sheikh Sanneh who received money from him.

“Did Sheikh Sanneh sign the contract with you?” Council Sissoho further questioned.

“He signed as a witness,” Mr. Mboge responded.

“Did you seek any legal and technical advice?” the witness was asked. “Yes,” he replied.

Council Sissoho also asked him whether he could tell the court whether he knew the amount of money involved in the sale.

He replied he could not remember the amount involved because it happened some years ago but he would be able to tell the court the amount if he saw the documents.

Having denied the allegation, Bully Sannoh and Sheikh Sanneh were granted bail in the sum of D3 million with two Gambian sureties each.

They should also deposit a title deed of a landed property not less than D3 million which should be deposited with the registrar of the court.

The case was adjourned to 13th October, 2020, for continuation.

NEW DELHI — India has said that four cough syrups linked to child deaths in the Gambia were found to be complying with safety specifications when tested at home. 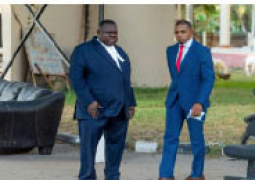 The “Less Wakhul“ of the High Court judgment: Here is why CA has not yet been officially cleared to contest the December 4 presidential election

Gambians especially on social media have been celebrating the recent high court judgments in favour of the Citizens‘ Alliance (CA) party and the Gambia Moral Congress (GMC) against the decision of the country’s electoral body - the Independent Electoral Commission (IEC).