“Unfortunately, the announcement of the D500 million funds makes people to even forget about issues of covid-19. All they talk about is money, money, money. That’s why I said our work is very, very difficult.”

“When the announcement of the fund was made, government advised them to give some token of honoraria to the frontline workers. This announcement sparked a distraction amongst some health workers.”

The health minister was speaking before the legislators at the National Assembly on Saturday as the minister for Justice tabled a motion for the extension of the State of Public Emergency.

“This allowance issue is very unfortunate. Government came up with the idea that, as we have been saying ever since: no one can ever pay health workers enough especially frontline health workers, because when people are sleeping the frontlines are out risking their lives to provide healthcare for our people,” Dr. Samateh told deputies.

After the government’s advice on the honoraria, Dr. Samateh added that they asked the minority health frontline workers to provide a list of people for the token of appreciation. However, he said that he later found out that there were 300 people in the list who are not working within the health sector.

“Now, that minority provided a list. In fact, when you look at the list and estimates, it consumes almost the entire 500 million dalasis for allowances.

That was the suggestion and of course we will not accept that and we said to them, it is a non-starter and they went back and brought another list which was so big. And when we looked at the list, we saw names of over 300 volunteers whom nobody knows where those volunteers are working in the health sector.”

He added that they cancelled all those lists and asked them to bring the list of the core people who are active players in the health sector.

Dr. Samateh, however, added that the majority of the health workers are hard working and dedicated who sacrifice their lives for the people of this country.

“The initial move was to pay the frontlines first, and the frontlines definition was those who were in the contact tracing, the surveillance, the laboratory, the case management team, the people at the accident and emergency wards, the people who are also at the outpatient unit because accident and emergency and outpatient are the people who will see any patient coming in the health facility. When they come and suspect covid-19, they alert the case management team in that facility. So these are what we regarded as frontlines and this is what delayed the list.”

He added that the estimated honorarium for each frontline worker is D5000. 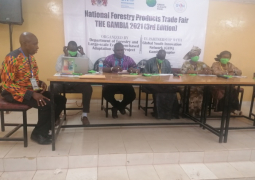 The Department of Forestry in Partnership with Large-Scale Eco- system-Based Adaptation Project and Global Youth Innovation Network, The Gambia Chapter is organising the 3rd edition of National Forestry Trade Fair.

The report of the European Union Election Observer Mission on The Gambia's December 4th Election states that political and campaign finances in the Gambia are largely unregulated as it urges to have been. 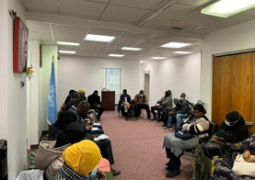